Drishyam Sundance Screenwriters’ Lab 2015 conducted a ‘Master Class on Screenwriting’ as a curtain raiser to the Inaugural Edition. The seven well-known screenwriters-filmmakers, Sriram Raghavan, Shridhar Raghavan, Srdan Golubovic (Circles), Erik Jendresen (Band of Brothers), Rose Troche (The Safety of Objects, The L Word), Habib Faisal and Kasi Lemmons (director of Eve’s Bayou, Talk To Me and actor in Silence of The Lambs and Candyman) shared their wisdom on the process of writing~ As a curtain raiser to the inaugural edition of Drishyam Sundance Screenwriters’ Lab 2015, which is a collaboration of Manish Mundra and Sundance Institute, a Master Class on Screenwriting was held at Enigma JW Marriott, Mumbai, yesterday. 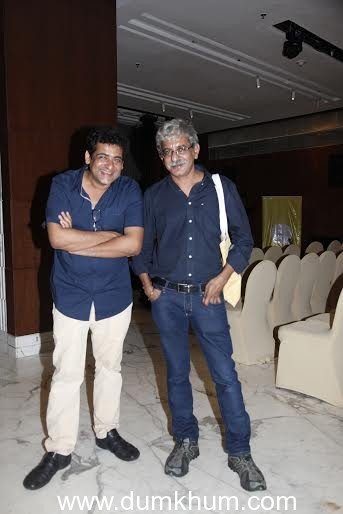 The event was graced by the presence of all the seven creative advisers of the lab: Srdan Golubovic (Circles), Erik Jendresen (Band of Brothers), Rose Troche (The Safety of Objects, The L Word), Habib Faisal (Do Dooni Char), Sriram Raghavan (Badlapur, Ek Haseena Thi), Shridhar Raghavan (Yennai Arindaal) and Kasi Lemmons (director of Eve’s Bayou, Talk To Me and actor in Silence of The Lambs and Candyman). 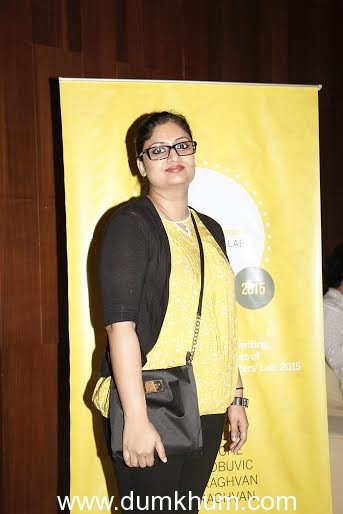 Inaugurating the function Srinivasan Narayanan, former director of MAMI, who is leading the lab in India, said: “The lab is an opportunity for independent screenwriters to get specific feedback on their scripts and move it one step ahead in its journey to being made into a film.”

Paul Federbush, International Director of the Sundance Institute Feature Film Program who joined the gathering later says, “The Master Class was a huge success and we are hoping to have a wonderful Screenwriting Lab in Goa.”

Veteran screenwriter Anjum Rajabali welcomed the seven creative advisers present, each of who will be in the coming days assigned to one of the seven selected projects each. Rajabali, who has been a creative adviser for programmes conducted by Sundance Institute previously, emphasised on the need to tell stories that are deeply rooted in our culture. Wishing the lab fellows luck, he said: “Sundance has been a leader in encouraging young independent writers and helping them hone their craft by creating such platforms to ensure that their projects get made.”

The Master Class was moderated by Eric Jendresen, who kicked off the discussion by speaking about his own experiences of writing a script and inviting the other advisers to share their respective processes.

The discussion was mostly centred around the personal experiences of the creative advisers, how they choose what stories to tell, how they build their characters and how they design a screenplay around these characters.

Habib Faisal was of the opinion that Indians have a very unique and interesting screenplay structure, thanks to the interval culture here. “We have an edge over other formats because here audiences take a break to get their popcorn. So we have two three act structures to play with, one before the interval and one after it. I enjoy the thrill this provides of being able to build a three-act structure to a cliff hanger, leave the audience waiting and then get into another three-act structure to complete the story.”

Pointing out films like The Lunchbox and Court, Srdan Golubovic, said that Indian cinema is at an exciting and dynamic stage, which young writers can tap into. On his personal working style, he said: “I come from a place which is very difficult to live in, but very inspiring for filmmakers, because there are so many stories around us. I make films when I am strongly moved by an issue or a social phenomenon, but I try to transform that into an intimate and personal story my viewers will be able to relate to. Cinema is not about presenting social or political case studies, but about telling relatable, personal stories. I make films to provoke and raise questions not to send out a message.” He added, “A script is a happy marriage of poetry in content and mathematics in structure.”

Badlapur director Sriram Raghavan shared an anecdote about the time he narrated the script of his film Johnny Gaddar to a filmmaker friend. “He said something I will always remember: ‘The plot has no life and life has no plot’. I rewrote the script keeping this in mind and the result is out there for everyone to see.”

While Rose Troche compared a good script to a delicious meal a writer offers to an actor, Golubovic broke it down into two basic components: precise structuring and intuition. “It is more important what your characters do not say than what they end up saying,” he said, stressing on the importance of subtexts in a story. Troche, calling the industry gender-biased, encouraged women screenwriters/directors to be confident about their work and not be swayed by the suggestions doled out by male technicians.

Eric Jendresen summed up the Master Class saying, “The best way to protect your script is to not be protective of it.”

The talk ended with a brief Q&A session in which creative advisers answered queries on subjects like hyperlink narratives, non-linear storytelling and multi-plot structures. The Masterclass was followed by cocktails and dinner.

Founded in 1981 by Robert Redford, Sundance Institute is a nonprofit organization that provides and preserves the space for artists in film, theatre, and new media to create and thrive. The Institute’s signature Labs, granting, and mentorship programs, dedicated to developing new work, take place throughout the year in the U.S. and internationally. The Sundance Film Festival and other public programs connect audiences to artists in igniting new ideas, discovering original voices, and building a community dedicated to independent storytelling. Sundance Institute has supported such projects as Beasts of the Southern Wild, Fruitvale Station, Sin Nombre,The Invisible War, The Square, Dirty Wars, Spring Awakening, A Gentleman’s Guide to Love and Murder and Fun Home. Join Sundance Institute on Facebook, Instagram, Twitter and YouTube.

Drishyam Films, founded and promoted by Manish Mundra, is a company actively working towards building a platform for new and unique voices of Indian independent cinema. The company is focused on creating global content with rich Indian flavours. The journey started with the film AnkhonDekhi directed by Rajat Kapoor. The film was one of the best-reviewed films in India in 2014 and was critically acclaimed for its simplicity, philosophy, ensemble cast and acting. The success of AnkhonDekhi was followed by Umrika directed by Prashant Nair, which premiered at Sundance Film Festival 2015 and went on to win the Audience Award in the World Dramatic Competition section. Soon after, Dhanak, directed by NageshKukunoor premiered in the Generation Kplus at Berlinale 2015 and won the Grand Jury prize, as well as, a Special Mention from the Children’s Jury. The upcoming projects include the Indo-French coproductionMasaan directed by NeerajGhaywan, Waiting directed by Anu Menon and X-the film, an experimental collaborative feature directed by eleven Indian filmmakers.