Mumbai based licensing company, Dream Theatre, after recently launching merchandise for India’s  superhero Krrish 3, has tied up yet another landmark deal. Dream Theatre has become the licensing agent of Platinum Films’

iconic property Matt Hatter Chronicles for India and has joined the league of other renowned global agents for the brand.

As per this deal, Dream Theatre will give a significant brand presence to Matt Hatter Chronicles in retail and digital space by signing licensees across multiple categories and executing a co-ordinated cross-media retail programme as well as consumer marketing campaign across the region. Matt Hatter Chronicles is an adventure-comedy series about Matt, an ordinary boy who discovers that his family defends a gateway to a secret dimension called the Multiverse. To save the world and the Multiverse, Matt and his friends battle and capture infamous villains from movie, myth and legend.

.Jiggy George, CEO and Founder of Dream Theatre is delighted that his company is going to represent Matt Hatter in India. He said, “This exciting adventure-comedy series has so much potential across multiple platforms and scope for 360-degree activation that it will propel both the series and the merchandise to new heights.”

Platinum Film’s CEO, Nigel Stone commented on the new partnership, “Dream Theatre has an expert understanding of the licensing and retail market in India and their accomplished and dedicated approach to managing first class properties ideally positions them to spearhead the Matt Hatter Chronicles commercial roll-out in India in 2014.” 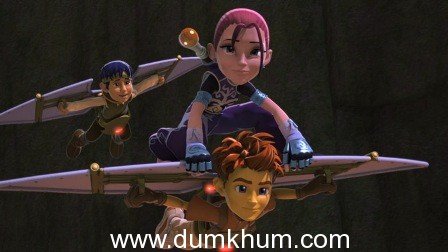 Produced by Pinewood Studios-based Platinum Films and Canada’s Dream Mill Inc  Matt Hatter Chronicles has sold into over 80 territories worldwide and been dubbed into 19 foreign languages. One of the brands USPs is the way Platinum Films has combined state-of-the-art 3D animation and visual effect techniques to create ‘Multivision’, an immersive and innovative 3D viewing experience for Matt Hatter fans without the need to wear 3D glasses. These visual treats have been further developed into fully stereoscopic 3D clips for online promotional and retail tie-ins to enable a child’s home computer to become a 3D TV, and giving would-be Hatter Heroes a one-of-its-kind experience to role play their hero in India.