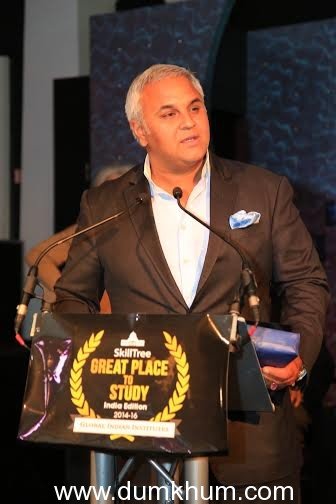 The accolade was presented to Dr Richie Nanda at a glittering gala dinner in recognition of his vision, drive and hard work in harnessing the vast potential of both The Shield Group and Topsgrup. Dr Nanda’s companies provide security for some of the world’s leading brands such as Apple, IBM, TATAs, high profile events such as the IPL and World Cricket Champions League, international celebrities, VIPs and prestigious venues such as 30 St Mary’s Axe (The Gherkin), the Imperial War Museums and Bournemouth University.

The “SkillTree Great Place To Study – India Edition” has been spearheaded by SkillTree Knowledge Consortium, India’s first syndicate of private universities and institutions in the country, and was presented in association with the international brand consultancy Sterling Media, and powered by Lavasa Corporation Limited, a subsidiary of HCC (Hindustan Construction Company). The awards acknowledged the contribution of 20 of India’s leading educational institutions to promote India as a great place to study, as well as honouring six of the UK’s most enterprising, innovative and successful business leaders and public office dignitaries, who have all played their part in promoting relations between India and the UK. A self-made entrepreneur, Dr Nanda is regarded as a leader in the global security sector, ensuring the likes of high profile sporting events, businesses and premier venues are protected. Dr Nanda is also acknowledged as the pioneer and the most prominent spokesperson of this burgeoning industry in India. Dr Nanda was recognised as an ‘Outstanding Entrepreneur of the Year’ after he took over the reins of Topsgrup at the age of 22. Under his leadership, Dr Nanda managed to transform the ailing company with revenues of just £30,000 PA and eight customers, and form it into India’s largest security group with revenues in excess of £200 million, 93,000 employees, 120 offices and about 8,000 customers.

Upon accepting the award, Dr Nanda commented: “It is a great honour to be presented with this award. This accolade is yet another tribute to the dedication and commitment of my talented team at The Shield Group and Topsgrup, who have worked so hard to bring both of these companies to new heights. I am also humbled and delighted to have been honoured at the launch of such a noble global campaign, as education is a cause that is very important to me and close to my heart.

“We have tremendous plans for each of these companies. Our aim is to position Shield amongst the top four security solutions providers in the UK within the next two years. In addition, we plan to make Topsgrup a leading brand in the global security space and a USD $10 billion security group by 2020.”

In July 2012, Dr Nanda completed a £19.5 million acquisition of The Shield Group, initiated with a 51% controlling stake in 2008. The acquisition has been a strategic and pivotal partnership, and has forged a stronger, more resilient and comprehensive security industry, both in India and the UK. As a result of the  partnership, the multi-award winning Topsgrup has made vital in-roads into the regional UK security market, as Shield has a strong presence in London, the South West, South East, the Midlands and the North of England. Since the acquisition, Shield’s business has expanded by opening several new offices across the country to become a leading national brand and the UK’s largest independent Total Security Solutions provider. The number of staff has increased to 2,500 and customers to 400.

The award also reflected the exceptional results Dr Nanda has seen across the business with his pioneering introduction of the Total Security Solutions (TSS) model at Shield, which comprised of creating structured teams by sector expertise with clear account management and responsibilities assigned to workforce and continuous management and feedback. The TSS model helped the company secure major contract wins from clients who had previously tried the “total facilities management” model in a recession, but now understand the importance of having a specialist security provider.

Also commenting on Dr Nanda’s win, SkillTree Knowledge Consortium Founder, Shekhar Bhattacharjee said, ‘We are delighted to present this award to Dr Richie Nanda and feel that he is a very worthy winner. Dr Nanda is a visionary entrepreneur, who applies an innovative, dynamic and far-sighted approach to any project he undertakes. His stellar achievements are testament to the vast talent, skill and knowledge pool that exists in India.’

In order to grow the business volume, Shield has hired seven managing and regional directors, invested £1M into an NSI Gold certified alarm-monitoring centre in Preston. All of these changes have helped increase revenues from £61M (2013) to £81M (projected for 2014). With a growth in EBIDTA of 67% from the last financial year, the combined turnover for Topsgrup and Shield this financial year is expected to be £170M.