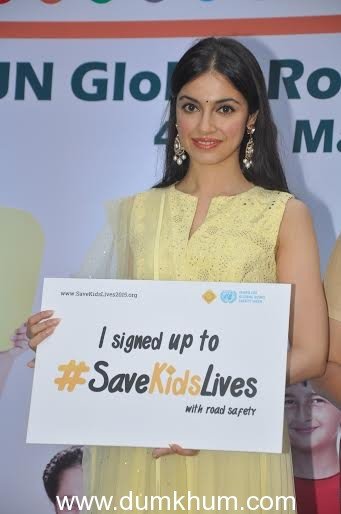 Dignitaries from the Mumbai Traffic Police were also seen at ‘Safe Kids Day’, held in association with the Safe Kids Foundation on May 9, 2015 to commemorate the 3rd UN Global Road Safety Week. Celebrating the 3rd UN Global Road Safety Week, High Street Phoenix associated with the Safe Kids Foundation to host “Safe Kids Day”, a day full of revelry and learning for children on Road Safety on May 9, 2015 between 4 pm to 9 pm. Celebrities Divya Khosla Kumar and Urvashi Sharma were present along with Smt. Jyotsana Mehta (Municipal Corporator, South Ward 214) and ACP Jadhav, Mumbai Traffic Police to lend their support to the cause. The “Safe Kids Day”, curated by the Safe Kids Foundation had activities and games integrating road safety information, as well as screening of films and demonstrations on road safety rules for the tiny tots. Activities included a lot of art and craft, games like puzzles and quizzes, dancing sessions, finger puppet making workshop as the kids learnt road safety and traffic rules. Global Road Safety week supports the United Nations Decade of Action for Road Safety 2011-2020 and draws attention to the urgent need to better protect children from death and injury due to road traffic collisions. Each day, more than 500 children die in road collisions while tens of thousands are injured often suffering lifelong disabilities. “Save Kids Lives” is the worldwide campaign for this year’s Road Safety week, where the UN calls for action to save children’s lives on the roads around the world. The campaign is built around the child declaration to be signed by communities and delivered to local and global leaders. High Street Phoenix in association with the Safe Kids Foundation will lend their support to the cause by hosting the “Safe Kids Day”. Safe Kids Walk This Way program was launched in Mumbai in October 2007 and expanded to two cities Delhi and Ahmedabad. From 2007 – April 2015 SKF reached out to over 2,000 schools and nearly 1.3 million children through education program. In addition over 1.7 million children were involved in correlated activities.