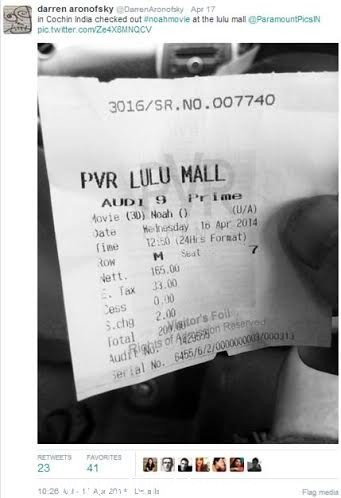 The Oscar winning director of the larger-than-life Hollywood film ‘Noah’ had been holidaying in Kochi, Kerala recently. During his stay there, he watched Noah in 3D at the Lulu Mall and later tweeted a picture of his ticket. Darren Aronofsky also tagged Paramount Pictures in his tweet saying, “In Cochin India checked out #noahmovie at the Lulu [email protected]twitter.comZe4X8MNQCV .”

The film features Noah, who has visions about a flood and takes measures to protect his family. Noah builds an Ark to save his family and the animals from the devastating flood. Presented by Paramount Pictures, the film was released on 28th March by Viacom18 Motion Pictures in India.