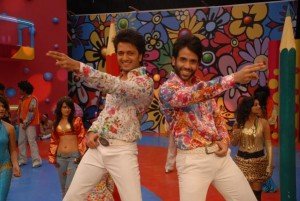 In less than 24 hours of its online release, the first track of the forthcoming sex-com ‘Kyaa Super Kool Hain Hum’ has created a flurry.

‘Dil Garden Garden’ took Twitter by storm as it was trending India-wide on Thursday at No.4 for the right reasons. It was, in fact, trending even above Vertu, Samajwadi Party & Ambika Soni.

A wide section of the industry, from Karan Johar to Sunny Leone, could not stop raving about the national hit on the virtual world.

Music composer Sachin (of Sachin-Jigar) was blessed with the best birthday gift, as his sole composition on the ‘Kya Super Kool…’ soundtrack, met with such an overwhelming response.

The funky video, choreographed by Bosco-Caesar, has been lauded for its energy, color and ‘kool’ retro look.

Anupam Kher summed up the response to the track in a short but sweet tweet: “Jai Ho”