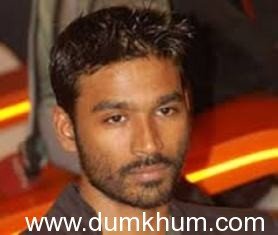 The team of Tanu Weds Manu Returns is currently shooting in Delhi and were in for a surprise last week ,when actor Dhanush dropped in on the sets, to surprise the cast and crew.
Dhanush who made his big Bollywood debut in Krishika Lulla’s Raanjhanaa, directed by Aanand L Rai, wanted to meet with the duo while in Delhi and decided to surprise them as he made an unannounced entry on the sets.
Says producer Krishika Lulla,Eros International, ” It was a wonderful surprise to have Dhanush drop in on the sets..It was great to have him here and it brought back memories of the team shooting Raanjhanaa”.

Says director Aanand L Rai, ” Dhanush is extremely special to me and I feel very protective of him…to have him drop in on the sets and wish us luck was very touching .He is one of my favourite actors and a great human being​.”