HMV Saregama is proud to be launching “DESTINY” – an album featuring Pankaj Udhas, Anup Jalota, Talat Aziz & Sumeet Tappoo. Each artist brings their own unique individual style, to create a masterpiece album and a collector’s item for both lovers of Ghazal and music all over the world. For three decades, the three stalwarts Anup Jalota, Pankaj Udhas & Talat Aziz have been ruling the music world with their albums and performances. Their own respective fan bases are in the millions not only in India but worldwide. For each one of their fans, this album will be a treat to be cherished. 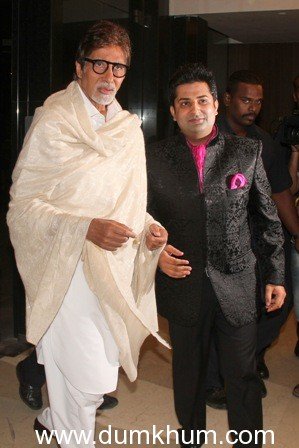 Sumeet Tappoo with Mr. Bachchans consent sang “Neela aasman” and Mr Bachchan said sumeet sang really well and he could have sung as good as him.” Mr Surya Mantha and Adarsh Gupta of Saregama were present and they mentioned “keeping with our policy to find and promote upcoming artists, we began our search for a talented young international singer to join the 3 legends so as to add a youthful perspective to the album and attract the next gen throughout the Indian diasp. The singers came with their respective wives DESTINY – What else can you call it when three of the most renowned artistes in the Ghazal world come together for the first time ever for a momentous album! And can it be anything less than destiny that an upcoming youngster, Sumeet Tappoo, joins the terrific trio in that album. But add to this, a youngster, Sumeet Tappoo, fast making a name for himself in the Indian music industry. Hailing from the Fiji Islands, Sumeet lends a youthful perspective and a fresh new voice to the album so as to attract the next gen throughout the Indian diaspora. His multiple album releases, his ever growing international fan base and his successful live concerts and performances around the world is testimony to his increasing popularity. Penned by (Late) Sri Ram Prakash Goel “Soz”, the Ghazals have been exquisitely composed by Anup Jalota and complete with a soulful musical score by Bhavdeep Jaipurwale. The four singers have given the Ghazals their heart and soul with brilliant renditioning of their two individual solos each. Perhaps the highlight of Destiny is the “quartet performance” where Anup Jalota, Pankaj Udhas, Talat Aziz and Sumeet Tappoo come together in a rare treat for music lovers. One must see the music video to see the fun and joy the four portray when singing this Ghazal together. Sumeet Tappoo Born in Fiji Islands, Sumeet Tappoo, an Australia MBA graduate, has moved to Mumbai to pursue a career in music as a playback singer. His multiple album releases, his ever growing international fan base and his successful live concerts and performances around the world is testimony to his increasing popularity. Sumeet has also sung alongside industry legends such as Shankar Mahadevan, Hariharan, Suresh Wadkar, Shaan, Sadhna Sargam and others and has established him as a respectable talent. His obvious progression into playback singing has seen him record a few romantic film songs set for release in movies in 2014. Padmashri Anup Jalota, known for his versatility, renders both Ghazals and Bhajans with equal grace and finesse. His mellifluous and powerful voice has an incredible range but one which soothes the soul. His live concerts leave audiences spellbound in admiration. He has created world records by achieving Gold, Platinum and Multi-Platinum awards for over a hundred of his releases. The ever-smiling and ever-obliging legend continues to perform the world-over adding to his thousands of performances already. Padmashri Pankaj Udhas has been credited for taking Ghazals to the realms of popular music. His silk soothing voice has attracted millions of fans around the world. The breadth of his success spans across various platforms of albums, playback singing as well as his flawless live performances across the globe. Thirty-three years and fifty albums since his first release, Pankaj Udhas continues to be one of the most successful Ghazal singers of our time. The multi-award winning singer is also a well-respected philanthropist the world over. Talat Aziz, one of the most celebrated disciples of Ghazal great Ustad Mehdi Hassan, came on to the music scene thirty four years ago with his first album “Jagjit Singh Presents Talat Aziz” which became an instant hit with Ghazal fans. Three decades on, multitudes of albums and concerts later, the dashing Commerce Graduate from Hyderabad has become a favourite for many around the world for his versatility in singing both Ghazals & Sufi and his soul-stirring renditions for Ghazals in Hindi Films.