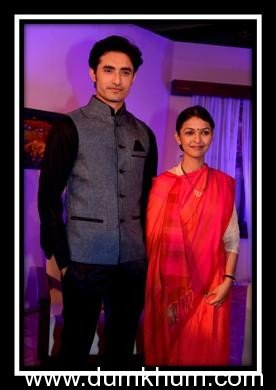 16th December, Monday –  Nandini is amazed after hearing the proposal. She  asks Gayatri to speak to her parents. Reporters start to leave Inderraj’s press conference once they get this news about Nandini Rajvir rishta being fixed. Nandini gets back home and tells her parents. Gayatri comes and asks for Nandini’s hand for Rajvir. Gayatri announces this in front of the media and Raghuvanshi family is shocked. Rajvir who is with Jeena is also shocked. On one side, we have Nandini who is dreaming about her future with Rajvir and on the other side, we have Rajveer telling Jeena that he will not get engaged to Nandini.

17th December, Tuesday – Rajvir confronts Gayatri and tells her that he won’t get engaged to Nandini. Gayatri makes him understand that this is temporary and he can break the engagement post elections. She tells Nandini is ok with this, but Rajvir makes it a point to confirm with Nandini on this. Nandni is happy when she gets a call from Rajvir and in a double meaning conversation, gives Rajvir wrong impression that she knows their plan and is knowingly getting into this. After getting Rajvir’s consent, Ambika tells kundlis have to match first and Gayatri immediately informs Abhay to convince the family astrologer somehow. Meanwhile, on Inderraj’s instructions, someone plants a recorder in the Raghuvanshi study.

18th December, Wednesday – Astrologer tells about Nandini having raaj yog and Rajvir and Nandini being the best match possible. Gayatri comes to know that Abhay had not asked him to say all this. Gayatri mocks Astrologer’s prediction. All this gets recorded. Inderraj and family hears this and their doubts are confirmed. They decide to reveal it all in the engagement. Mehandi is being held at both the houses.  Divya comes to Nandini’s house to give shagun. The watch given by her breaks by mistake which is an apshagun. Inderraj and sushant carry the CD with Gayatri’s recorded voice in it. Enagagement begins. Inderraj plays the CD and corners Gayatri into announcing Rajvir & Nandini marriage in just 3 days.

19th December , Thursday – Inderraj’s plan again backfires. Gayatri speaks to Nandini’s parents and assures them that it should be a simple marriage. Rajvir is shocked by the announcement, tries to console Jeena who is also present there and tells her they will go back to London for the time being. Pandey family confused about the CD but Nandini assures them that she trusts Gayatri & Rajvir. Ambika is ok with Gayatri’s decision as its for Rajvir’s happiness. Rajvir confronts Gayatri and tells her he is going to London and says some hurting things. Gayatri feels she has lost everything and tries to kill herself. A gunshot is heard.