DDLJ’s Chutki was recently spotted at a marathon event ! 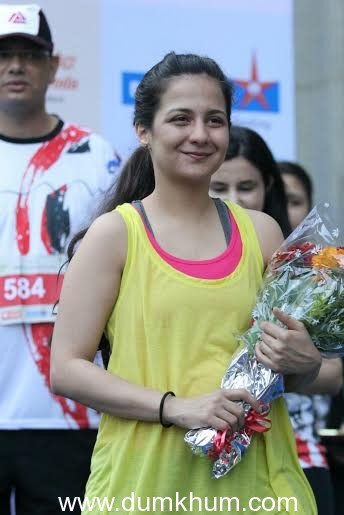 Pooja Ruparel better known as Chutki for her appearance in the most successful movie in the history of bollywood – DDLJ was recently spotted at a marathon event organised by a leading financial services company.

The IL&FS Fun Run also known as the BKC Corporate Run is an annual event aimed at helping increasingly desk-bound executives incorporate fitness into their daily routines through running. Over 4000 Mumbaikars took their track pants, running shoes and the other running gears out of their wardrobes headed straight to BKC to participate in the race which also featured stalwarts from the banking and financial sectors. The event over the years has grown in proportions and saw double the amount of participants as compared to the 2013 edition. This year the event featured a special race for wheelchair bound children organized by IL&FS in association with NGO ADAPT (Able Disable All People Together) that saw 15 children take part. The partnership with ADAPT is part of the company’s CSR commitment and IL&FS has pledged to donate a percentage of the revenue earned from the Fun Run to the NGO. Pooja was present at the event to encourage the children and also to felicitate them for their courageous participation.