Workshops and Master classes by Subhash Ghai, Rajit Kapur and Krishhna Murthy was an added attraction 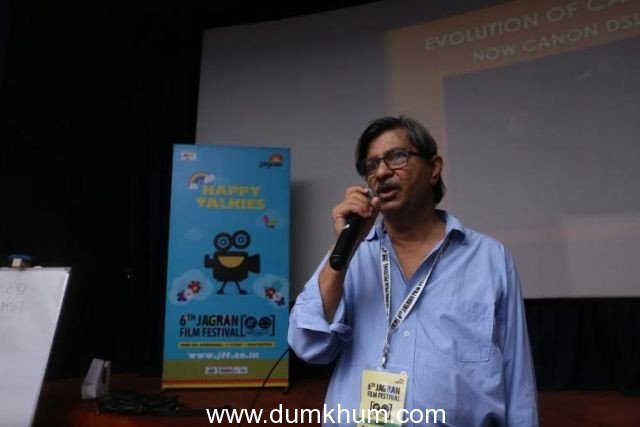 Delhi, The first three days of the Jagran Film Festival habituated the film lovers to be entertained and enthralled by the sheer expanse and excellence of world cinema. Workshops, master classes and an atmosphere that bred love of films was an added attraction. With Day 4, the film extravaganza soared higher and brought film lovers closer to the larger than life world of films. The day opened on an emotional note with Italian tragic-comedy drama Life is Beautiful and Hrishikesh Mukherjee’s comedy of the 70’s Bawarchi. Happiness prevailed all through the day with joyful films such as the Raj Kapoor classic Mera Naam Joker and Sunil Subramani’s Hindi film Fuddu which made its world debut under the India screening segment. The consecutive screenings under Top Shorts of French films Leftover and Your Heart At Random, Korean films Hossana and Minsu Kim in Wonderland, proved to be worth the wait with a delectable mix of genres, cultures and expressions.

At the American Centre Auditorium, Rob Marshall’s musical comedy Chicago, musical classic Vincente Minnelli’s An American In Paris and Craig Gillespie’s sports comedy drama Million Dollar Arm brought the spotlight on to the American culture and life under the Country Focus segment. The movies will be exclusively showcased at “The American Center” Kasturba Gandhi Marg. Learning was the order of the day for ones with a keen mind. A uniquely designed workshop conducted by Rajit Kapur on Finding Money For Films saw presentations by MPDA on APSA Grant for film makers. Every minute spent with cinematography specialist Krishhna Murthy in the 180 minutes master class on Still Photography workshop delighted those with a camera and a keen eye. The workshop thoroughly enlightened the participants on the magical effects of light, camera operation and handling techniques and other nuances that make a picture worth a thousand words. The afternoon tete-e-tete of Mayank Shekhar with one of the greatest directors of the Hindi cinema, Subhash Ghai was a priceless peek in to the world of films from a film maker’s point of view. The session served to be 90 minutes of pure expert speak simmered with real life anecdotes from the veteran director’s prolific film career.

Promising to present some of the finest works of cinematic geniuses, India’s largest travelling film festival, ‘Jagran’, features a notable selection of Indian and world cinema classics and contemporary films. Showcasing more than 100 feature and short films this year, Jagran Film Festival in its 6th edition is slated to be an eyeful treat for one and all.

The 2015 edition of Jagran Film Festival will traverse from Delhi to the Indian hinterlands of Kanpur, Lucknow, Allahabad, Varanasi, Agra, Meerut, Dehradun, Hisar, Ludhiana, Patna, Ranchi, Jamshedpur, Raipur, Indore, and Bhopal before culminating in Mumbai.  In close collaboration with festival partners such as Whistling Woods International (WWI), Film Federation of India (FFI) and Motion Picture Dist. Association (India) Pvt. Ltd. (MPDA), the 2015 edition is all set to surpass its own last benchmarks of presenting over 16 cinema appreciation workshops, 400 screenings in 17 cities, that were witnessed by a direct audience of more than 50000 film aficionados and a media reach-out to nearly 50 million people in India in 2014.