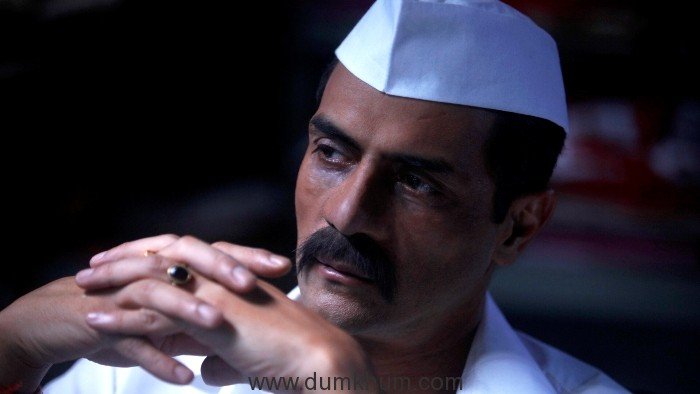 Playing real life character is never easy, especially when the person you are playing is still alive ! But the National Award winning actor thought otherwise and has not only essayed the role of real life gangster politician, Arun Gawli in his biopic but has tried to live every moment of the reel life of the person who was not only reserved, may be due to his colorful past but has a mysterious aura around him fondly known as Daddy by his followers and near and dear ones.

Despite this not being a fictionalised account, it goes to the gut feeling of Arjun Rampal that he has not only decided to produce the biopic but has taken pains and put in his best efforts to match the looks and keep the facial characteristics as similar to that of Gawli, except for the height which somehow he managed to look through. This being a legit gangster biopic film, as compared to other regular ones Arjun along with the director Ashim Ahluwalia seems to have done some extensive research and recreated Gawli’s surroundings superbly especially the Dagdi Chawl. Staying true to his character there is no glam and gloss attached and focusses more on Gawli’s growth and journey through 80’s & 90’s when he peaked at his notorious best and remained a dreadful gangster for the rest of the city, while he was perceived as a man of family at home, and protected people in his locality who addressed him as Daddy.

The real Gawli that the people of Dagdi Chawl know is very different from the one portrayed in the media.

And this where the director has succeded in not making it a propaganda story but make it as real as possible. Arun Gawli’s story which is spanned over 4 decades shows He’s not flamboyant, doesn’t go to dance bars and blow up money on bar girls and mistresses. He’s spent half his life in jail but is a Godfearing, family man and the fact that despite the menacing image of being part of the underworld, he was a God fearing man. He didn’t fear the cops or the rival gangs, but he definitely had a fear of God.

In 70’s , 80’s & 90’s Mumbai was then Bombay and Arun Gawli ruled the underworld network in the city.You feel the sense of realism as the film takes you through various alleys and gulleys of Parel,  Bombay Central than, Nagpada, Agripada and other places that served playground for Gawli and his team. Shot in the location of Kamathipura, Mazgaon, Police Stations, and Bars that operated in those period gives a very realistic look.

The success of the film lies in the fact that you get transported to that bygone era and stay glued to your seat, waiting for the next scene to appear beacause Gawli’s story has many layers and you keep on wondering as to which one the director is now going to unfold.

With Arjun Rampal as Gawli and his close associates like Babu Reshim (Anand Ingale), and Ram Naik (Rajesh Shringarpure) they were the leaders of the dreaded B.R.A gang, also get mentioned by their real names. Similarly Aishwarya Rajesh as Asha Gawli are the casting which are spot on and they have delivered like wise most aptly and justified their characters to quite a good extent. His rivalry with the most dreaded gangster of his time which is spiritedly performed by Farhan Akhtar who migrates to Dubai in a very meaningful cameo helps Gawli get some brownie points as far his popularity with his people went and even managed to score in politics by fighting an election and becoming an MLA. Insector Vijaykar Nitin played by (Nishikant Kamat) a ruthless,over ambitious and jealous cop who has always been after the blood of Arun Gawli aka Daddy somehow manages to get him behind bars has put in a noteworthy performance and helps in taking the narrative to its conclusive end.

Sajid Wajid staying true to the era has a song from the 80s which is part of a scene that takes place in Caesar Palace, a legendary nightclub from that time. Zindagi Meri Dance Dance takes you back to that era. As for the Ganesha track, they got the same band (Ajinkya Band) to play music in the film who had played at Gawli’s son’s wedding. Small details like these have surely helped in making Daddy’s soundtrack stand out from the crowd and maintain the level of authenticity.

Daddy transcends over 40 years from Arun Gawli at age 24 to his current age 65 very superbly enacted by Arjun Rampal in one of the most beautifully executed realistic gangster high intense drama till date. Just go and make most of the history unfold in the wake of Realism and Realistic Cinema !!!