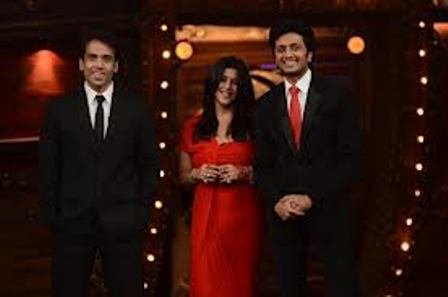 This is the studio’s seventh consecutive hit after Love Sex Aur Dhokha, Once Upon A Time In Mumbaai, Taaryanche Bait (Marathi), Shor In The City, Ragini MMS and The Dirty Picture.

Advance anticipation for the film was at fever pitch, as the comic sequel, released widely on 1421 screens and withstanding Ramadan, collected an enormous Rs. 7.12 Cr (Net) on Friday, placing it among the top 10 openers of the year.

The stupendous opening is substantially higher than that of some other films released earlier this year, that were made on higher budgets and featuring a bigger star cast.

Basis the first day figures and the continuing favorable response on Saturday, Kyaa Super Kool Hain Hum is poised for an enormous opening weekend of  22 Cr+.

Said producer Ekta Kapoor, “We got gaalis from the critics and taalis from the audience. That is the recipe for sure-shot box office success.”

The film’s satellite and audio rights have been pre-sold. The thunderous response to the film has resulted in an addition of screens on Saturday.

Produced under the Alt Entertainment banner, the film has been written and directed by Sachin Yardi, and stars Tusshar, Riteish Deshmukh, Sarah-Jane Dias, Neha Sharma, Anupam Kher and Chunky Pandey, among others.