The 43rd International Film Festival of India (IFFI-2012) was declared open here amidst festivities, glitz and with a promise to make India an international destination of good cinema. 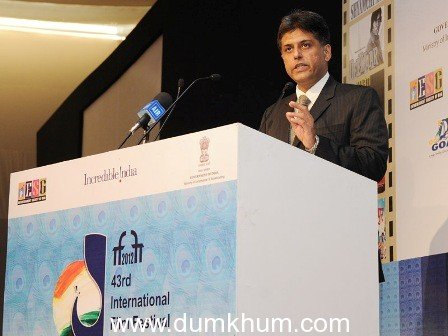 Information and Broadcasting Minister Shri Manish Tewari assured the august gathering that Government on its part is taking a number of steps to nurture the Indian film industry and to promote India as a destination for film shooting. He said that Government is embarking on an ambitious National Film Heritage Mission during the 12th five year plan to preserve India’s film heritage. Moreover, with a view towards encouraging co-production between India and other countries, India has entered into co-production agreements with various countries. Chief Minister of Goa Shri Manohar Parrikar said that the journey which was started by him 8 years ago has yielded positive results and Goa has been awarded as a best film destination. He, however added that a collective endeavour will be made to take this festival to newer heights and to make it truly international. Shri Uday Kumar Varma, Secretary, I&B Ministry said that IFFI has grown from strength to strength incorporating new themes and all efforts will be made to imbibe the spirit of Vasudhaiva Kutumbakam (the whole world is one family) through IFFI. The Chief Guest of the event and the Bollywood heartthrob Akshay Kumar said that cinema is very-very important not only for him but for his entire family. Pitching for good and wholesome cinema, he felt proud that the festival is happening in the centenary year of Indian Cinema. 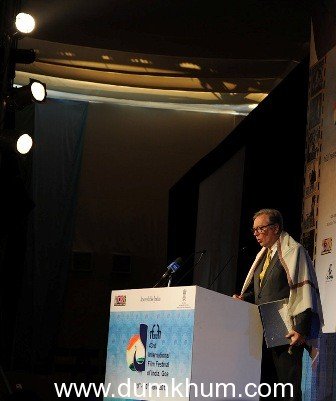 Renowned Polish filmmaker Krzysztof Zanussi was conferred upon the prestigious Lifetime Achievement Award on the occasion by Shri Manish Tewari, which carries an amount of Rs10 lakh, a scroll, a shawl and a certificate. Known for producing acclaimed films like Camouflage, Family life, and The Silent Touch, Zanussi said amidst standing ovation that this is the most moving moment of his life that he is being awarded for some achievement and promised to make more films in future. He said, 21st century will be Asia’s Century and it is his deep belief that it will be India’s Century. Gautam Ghosh, Chairman of the International Jury and all the Jury members were felicitated by the IFFI. Shri Ghosh said, IFFI has gone through many ups and downs but it’s still glowing. He also called for more autonomy for the film body to function in an efficient way. Hosted by Kabir Bedi and Perizaad Zorabian, the event showcased the evolution of 100 years of Indian Cinema through a brilliant combo of music, dance and videos conceived and directed by Jahnu Barua, Saroj Khan and Sajjad Ali. Nearly two-hour cultural extravaganza came to a close with the spell-bound renditions of Kailash Kher. 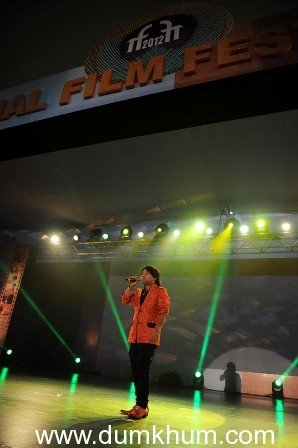 With the galaxy of stars like Akshay Kumar, Irrfan Khan, Tabu, Om Puri, Jackie Shroff, Vinay Pathak, the opening ceremony was a bit different from the previous festivals. As a part of the international presence, the cine lovers were treated to the company of renowned film personalities like Kim Ki-duk, Michael Winterbottom, Susanne Bier amongst others. Academy Award winning Director Ang Lee’s much acclaimed 3D film “Life of Pi” is being screened this evening as the opening film of the 43rd International Film Festival of India (IFFI-2012). The cast and crew of the film including Irrfan Khan and Tabu are present on the occasion. In the 43rd edition of IFFI, over a hundred movies will be screened as a part of the Indian Cinema and the World Cinema segments. The Indian Section will bring to the audience movies from across the country in the Indian Panorama (Feature and Non-Feature Section) which is selected by a core jury headed by Buddhadeb Dasgupta for the Feature and M R Rajan for the Non-Feature section. The Indian Panorama will screen twenty feature films with ‘Baandhon’ director by Jahnu Barua as the Opening film, and nineteen films in the non-feature section with ‘Celluloid Man’ directed by Shivendra Singh Dungarpur as the Opening film.

Apart from the International Competition, the cine lovers at the 43rd IFFI will be treated to a varied line-up of world cinema which will be showcased in sections like ‘Cinema of the World’ which will have a showcase of fifty-one films from forty-two countries with Ang Lee’s 3D film ‘Life of Pi’ as its Opening Film and Mira Nair’s ‘The Reluctant Fundamentalist’ as its Closing Film. Other sections in the International section include ‘A Cut Above’, ‘Masterstrokes’, ‘Festival Kaleidoscope’, ‘Turkish Currents’, ‘Sketches on Screen’, ‘Retrospective: Susanne Bier’, ‘Special Tribute: Ashok Amritraj’, ‘In Focus: Kim Ki-duk’, ‘Soul of Asia’, ‘Documentaries’ and ‘Homages’.