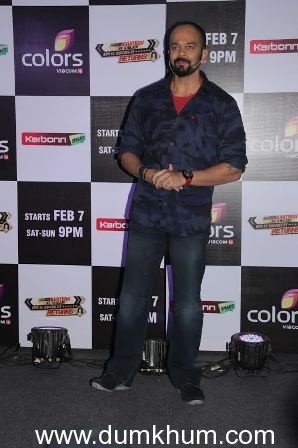 With death defying tasks, this season danger and fear will follow the contestants 24 x 7

This electrifying Blockbuster premieres on February 7 and will be on air every Saturday and Sunday at 9:00 PM only on COLORS It’s that time of the year when you hold on to the edge of your seats as fear is sure to grip your heart in its steely hands. Pushing the boundaries of action, adventure and entertainment, COLORS is back with an all new season of the one show that raises heartbeats, gives you goose bumps and gets your adrenalin pumping – Khatron Ke Khiladi: Darr Ka Blockbuster Returns. This season, every jump will be stupendous, every stunt will be edgier, every fall will be riskier and every task will be zanier. Produced by Endemol India Pvt. Ltd and shot in the scenic locales of Cape Town, South Africa, Karbonn Mobile presents Khatron Ke Khiladi: Darr Ka Blockbuster Returns will hit airwaves on 7th February, 2015 and will air every Saturday and Sunday at 9:00 PM on COLORS. Khatron Ke Khiladi: Darr ka Blockbuster Returns is designed to keep contestants on their toes at all times with some of the most nerve-wrecking challenges and death-defying stunts designed by none other than master stunt architect – Rohit Shetty. This season Fear takes a whole new meaning as it will just not lurk the contestants in the battleground but will shadow the contestants everywhere! No matter where they are, fear follows. Contestants have to watch their step every moment as they never know when danger might strike! Adrenalin  will be at an all-time high as the contestants will be required to live with it 24 x 7 in a ‘Darr Ka Ghar’ created especially to raise the show’s entertainment quotient. This season gives a unique twist to the format with the inclusion of an interesting theme every week. These themes include: ‘Insomnia. Week’ where the contestants were sleep deprived the night before the stunt to test their will power and patience, an exciting ‘Bollywood Theme’ where the stunts are inspired by popular Bollywood films and terrifying ‘Horror Week’ giving the contestants a real taste of thrill and fear at the same time with stunts set up in scary locations.

Commenting on what the viewers can expect from the show, Manisha Sharma, Programming Head – COLORS, said,  “After a successful season last year, Khatron Ke Khiladi: Darr Ka Blockbuster Returns is back with unique elements enhancing the entertainment level this season. This time around viewers will be treated to stunts that will astound with their edginess. Fear will permeate every aspect of the show, right from the stunts to the house where the contestants are staying. Needless to say, the contestants have also had to up their game to keep up with the surprises that are being thrown at them. Rohit Shetty, the architect behind these fascinating stunts has also taken on a more mature role this time. His role goes beyond anchoring, into being a disciplinarian keeping contestants in check while also provoking and prodding them to face their fears. Truly adding the ‘blockbuster’ touch to the show, a lot of new elements and high energy will make the show a thrilling watch as the contestants give it their best shot.” Outshining the boys this year, the girls will take over this season in the true spirit of Khatron Ke khiladi:

Darr Ka Blockbuster Returns. Bollywood’s handsome hunk Ashish Chaudhary who is known to tickle audience’s funny bone with his – ‘Dhamaal’ act will be in for a surprise when he finds himself in middle of some ‘Dhamakedaar’ explosions burning away his expectations from his journey in Khatron Ke Khiladi.

We all have seen and loved Rashmi Desai in Uttaran as the outspoken and bold ‘Tappu’, but contrary to her on screen image Rashmi develops cold feet, literally, at the sight of stunts! The first few episodes of this season will amaze viewers beyond measure with the superior-level of stunts planned and executed with such precision and enthusiasm. Helicopters, cranes, glass tunnels and speed boats, the contestants will have to push their way ahead with utmost accuracy driven by sheer will-power, this season. As Rohit Shetty joins back as the host for this year’s action-packed extravaganza, the show is all revved up as the scary stunts unfold against the breathtaking landscape of Cape Town.

Elaborating about the newest season of the show, Rohit Shetty said, “It feels fabulous to be back this season. Khatron Ke Khiladi is one brand that dashes advanced level of adventure with every new edition. There is a lot beyond the physical capabilities that the contestants will be tested on. This year I have ensured that contestants can shed away all their anxieties, fears and panic for which I have also worked closely with the creative team. Every week has been an unexpected and surprising journey for the contestants and the viewers are in for a complete joyride.”

Deepak Dhar, Managing Director – Endemol India Pvt. Ltd said, “Khatron Ke Khiladi: Darr Ka Blockbuster Returns will be as riveting for the viewers as it has been taxing for the contestants. We have doubled the dose of danger, action and entertainment this season while introducing new concepts and themes to make the show a truly engaging watch. Rohit Shetty’s contribution in making the show a complete blockbuster has been unparalleled and, as the show prepares for launch, we are all set for the true action to begin.”