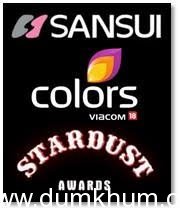 ~ Promises to be the Biggest and the Grandest Awards Night with Performances by Shah Rukh Khan, Deepika Padukone,Saif Ali Khan, Kareena Kapoor, Madhuri Dixit-Nene, Parineeti Chopra, Sonakshi Sinha and Arjun Kapoor among others;

To be hosted by Karan Johar& Riteish Deshmukh ~

COLORS and Sansui today announced its association with the Indian Film Industry’s premier entertainment magazine, Stardust, to telecast the prestigious Sansui COLORS Stardust Awards. The three entertainment giants– COLORS, Stardust and Sansuihave joined hands to create a night that will raise the bar of entertainment. As the First, the Biggest and the Most Credible awards, the Sansui COLORS Stardust Awards will celebrate the achievements and finesse in film-making that have been achieved in 2014, across more than 25 categories including some newer categories like International Icon of the Year. The star-studded and glamourous awards night is scheduled to take place on December 14th, 2014 at MMRDA Grounds in Bandra Kurla Complex and will be aired on COLORS in January 2015.

The Sansui COLORS Stardust Awards night will witness the presence of the biggest faces from the film industry who will collectively recreate the most entertaining moments seen on screen during the year gone by. Taking the show to the next level, the event will witness high-voltage acts performed by the film industry’s most entertaining and loved actors including Shah Rukh Khan, Deepika Padukone, Saif Ali Khan, Kareena Kapoor, Madhuri Dixit-Nene, Parineeti Chopra, Sonakshi Sinha and Arjun Kapoor among others. The awards function will be hosted by celebrated director Karan Johar and the talented Riteish Deshmukh. These stars will also perform stunning and spectacular acts specially choreographed by the affable Geeta Kapoor that promises to be full of energy and vigor. Further, as the first-ever viewer’s choice awards of the year, the Sansui COLORS Stardust Awards will recognize and celebrate cinematic excellence that has enthralled viewers across the world from across genres like mainstream action, drama, romance-comedy, as well as filmmakers who have gone beyond convention to explore newer genres of entertainment. The evening will also witness Special Awards being given to those artists whose contribution towards the development of the film industry has made it the global phenomenon that it is today.

Commenting on this unique partnership, Raj Nayak, CEO – COLORS said, “This is our first year of partnership with Stardust and Sansui, and we are collectively working towards creating the biggest and most credible awards show. As the first such endeavour in 2015 to recognize and celebrate the talent that was showcased in the year gone by, we are striving to enhance the scale of the show while making it a more entertaining proposition for our viewers. Together, we are looking forward to presenting a spectacular show that will kick off 2015 with a bang which promises to be the setting stage for a more inspiring year.”

Speaking about the awards, Nari Hira, Chairman – Magna Publishing Co. Ltd. said, “This is the 12th year of Stardust Awards. I am pleased that the scale of the awards will outdo everything we have done before. Thanks to our tie-up with COLORS and Sansui, the show will be the first and probably the biggest event of 2015. Apart from nominees and performances we are expecting attendance from the top league actors, directors and producers from the Hindi film industry. I think this is going to set a new benchmark of quality and showmanship, without doubt it is going to be the best award show of 2015.”

At the Sansui COLORS Stardust Awards, executed by Cineyug, the members of the Indian film industry come together to applaud each other’s efforts and celebrate the year’s most outstanding performances. The glitzy and glamour-filled awards night will see the biggest names in film fraternity come together in support of their friends and contemporaries who have raised the bar of entertainment in 2014.

Sansui started its India operations in year 1997. From a small company in the entertainment industry, owing to its ground breaking technologies, today Sansui prides itself in being a house-hold Consumer Electronics Brand in India. Sansui is one of the most loved brands in the country, with a reputation for new age technology and excellent after sales service. In India, Sansui has marked its presence across all major towns and cities in the country.