CLOSEUP AND 92.7 BIG FM BRING BACK ‘CLOSEUP ANTAKSHARI’ ON RADIO

Closeup and 92.7 BIG FM announce the return of the legendary show this time in Bihar and Jharkhand, in addition to Uttar Pradesh

Host Manoj Tiwari to choose 1 winning team through an inter-city competition across 12 cities in Uttar Pradesh, Bihar and Jharkhand 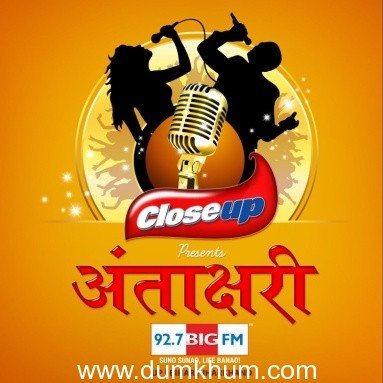 The game of Antakshari lies in the heart of most Indian celebrations and gatherings. Closeup has been associated with the show right from the start and is still fresh in the minds of consumers in UP. A brand that is young at heart, Closeup has owned the platform on the TV medium and driven engagement not just with the youth but with the entire family. Closeup along with content partner 92.7 BIG FM then decided to re-create the magic on Radio by calling out to today’s youth to participate. Given the encouraging response received in Uttar Pradesh in 2013, Closeup Antakshari will take over radio once again, not just in UP but in Bihar and Jharkand as well.

Renowned actor Manoj Tiwari returns as the host for the 2nd Season as well. 12 teams from 12 different cities will be selected through a process of city finales, followed by elimination rounds on radio where listeners vote for their favorite teams. The grand finale for the contest will be held in Lucknow, where 3 teams will compete for the winning title and a grand prize.

Commenting on the launch of the show, Mr. Ashwin Padmanabhan, Business Head, 92.7 BIG FM said, “Close-up Antakshari has been a much loved property on television and we are proud to have recreated such an iconic show with Closeup on radio for our listeners. We have had an extremely successful season last year and we thank our partners again for this association. We stay committed to launching properties that will not only provide for entertaining content but will also enable innovative engagement opportunities for advertisers.”

Looking forward to his Closeup Antakshari experience for the 2nd time, Host Manoj Tiwari said, “Closeup is a brand that has the greatest recall when you say Antakshari. It created an instant connect with all age groups, especially the youth and went on to become the most watched show. I remember diligently watching and enjoying each and every episode. It is my pleasure to host this activity on radio for the second time in a row. I love talking to my people here and engaging with them through Closeup Antakshari is the best way. I am confident that Season 2 will be a huge success.”

The show has been a huge success on television and it was a bold move by Closeup to recreate the magic of the property on radio with content partner 92.7 BIG FM. The debut season of ‘Closeup Antakshari’ in UP was a grand success and recently won an RMAI Flame 2013 award for ‘Best Radio Campaign of the Year’. For participating in the new season, listeners can register themselves through IVRS and SMS. The ‘Closeup Antakshari Mix’ will mark the beginning of the property, with an all day roadblock across radio stations in UP, Bihar and Jharkhand wherein songs will be played all day in Antakshari format on the 7th of February.

Through the 15 week campaign, listeners will be engaged through promos, special capsules and RJ mentions. Going by the response for the first season, registrations are expected to pour in by the hundreds of which the best teams from the cities will compete in the respective city finales. The City winners will then be pitted against each other through a 6 week show on radio. Ultimately, the best 3 teams will participate in a grand finale at Lucknow.

Registration for Auditions on Toll Free Numbers are now Open!