Choreographer Ganesh Hegde is on a new high to celebrate his birthday in style. 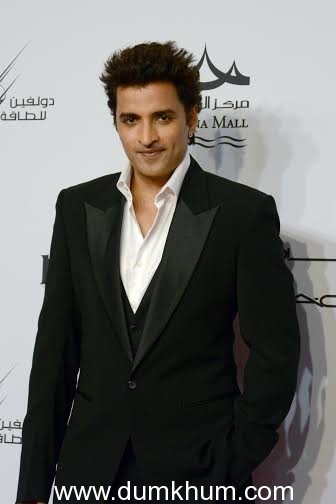 Ganesh Hegde, the handsome dancing sensation, is having the time of his life. Hedge who is busy with his debut film venture had a crazy few months.

For starters, the Director, Singer, Performer & Choreographer and his wife Sunayna Hegde were blessed with a baby boy on the 20th September. Secondly, his company Ganesh Hegde Entertainment Produced & Directed the first ever Bollywood Event”Magic of Bollywood” for Abu Dhabi Film Festival which was like “a las vegas show” as proclaimed by the audiences and cinema enthusiasts. And recently, he was asked by his friend Bollywood superstar Shah Rukh Khan to direct special music video of a song “Sharabi” from his movie ‘Happy New Year‘ just 4 days before the release of the film. Ganesh Hegde, famous for his song ‘Main Deewana’ and star studded videos “, Lets Party, Mindblowing Girls & Bollydude Ganeshan”, was elated after the arrival of his second baby boy. Born on 20th September, the cute little boy was named Hriyaan Hegde. This is his second child with Sunayna after Giaan, who`s 2.5 years old.

Ganesh had a busy October as his company, Ganesh Hegde Entertainment Produced, Conceptualized, Managed, & Directed the first ever Bollywood Event ”Magic of Bollywood” at the Abu Dhabi film festival. The event took place on the 29th of October at the Emirates Palace Auditorium and performing at the event under his guidance were Priyanka Chopra, Elli Avram, Anushka Manchanda to name a few. The event was hosted by Purab Kohli, was Conceived, Designed & Directed by Ganesh Hegde.

According to the sources, the song  ”Sharabi” required a special and unique approach and at such a last minute only Ganesh could get us such a video was the unanimous decision before being called on board to direct the song which was picturized on the star-studded cast of the movie . Despite his hectic rehearsals for the film festival, Ganesh obliged. The song was shot on 17 & 18th of October on 4 different sets in Mumbai just 4 days prior to the premier of the movie in Dubai. The song has already crossed more than 3.5 million hits on the digital portals and climbing the music charts as well.

All this good news comes right before his birthday today on the 10th of November as the star who is rearing to go all guns blazing next year with acting & direction offers , plans for a big celebration.