A novel way to celebrate Valentine’s Day,the team of MSM Motion Pictures and Contiloe Entertainment’s Darr @The Mall visits the Haunted House at a popular mall in the central suburbs. Giving audiences a glimpse of the horror they can expect within the ambiance of a mall .the makers invite the media and public to join them as they take a tour of one of the spookiest places around,keeping with the theme of the film ,which tells the story of a mall that unleashes its evil side on people trapped in it. 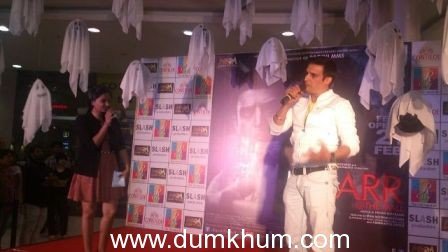 Says NP Singh  MSM Motion Pictures,”Darr @The Mall is the first-of-its-kind horror film and for that very reason we wished to do something completely out-of-the-box that would engage our target audience and invite them to be part of a spooky experience along with the starcast”.