Catching up with Gary Richardson in Mexican Bootcamp New Yorker Gary Richardson who had become a rather well known face in Mumbai especially in art and theatre circles besides the Page 3 parties in the city,is an author and having proved his mettle as a stand-up comedian had left India for US to complete his assignments over there. Here are the excerpts of a one to one dialogue with a very lively and energetic artiste over email as regards his activities in US and his future plans.

Hi Gary, Looks like you are enjoying Mexico.  How’s work going on your narrative non-fiction novel I’M NOT A TERRORIST!

Really well, Hemant.  Last week, I modeled for the back cover photo with legendary Mexican fashion photographer Nadine Markova at her bootcamp.  I will send the first half of the novel to Indian critics this week for reviews.
It’s the story of the Mumbai Terrorist Attack, and you being a suspect for five years in India, right?
Yes, Hemant.  After David Headley’s arrest for masterminding the attack, the police were searching for members of his Lashkar-e-Taiba terrorist cell, and because of a series of maddening coincidences, I was a suspect.  I couldn’t leave India until my name was cleared.
Sounds like it would make a good movie.
Hopefully, Hemant.  But no matter what, Harkin Chatlani and his India Book Distributors will get it in all the bookstores, and we can get some momentum. 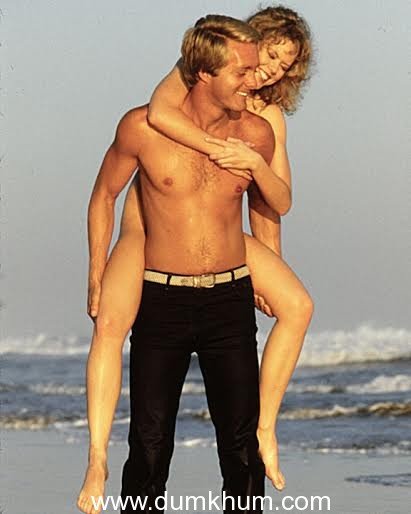 You modeled for these new photos at a bootcamp.  What’s that all about?
Back in 1981, I shot my second Mexican Vogue.  The photographer was Nadine Markova, we did some stunning photos in the Caribbean.  For most of the 80’s, when I wasn’t modeling in Europe, I was in Mexico City.  So she and I did a lot of work together.  Now, I’m back in Mexico after 30 years, and we have teamed up again at her bootcamp. What is it exactly all about ?
Nadine Markova Bootcamp is her high concept to lecture about photography technique in the classroom, then put top models in front of the cameras of elite photography students.  The creative models -we shot with top Mexican model Bella Torres- are veterans who take the students to a new level. You did this shoot at a college?
Yes.  It was a two-day bootcamp at the Real Monte de Pachuca branch of the Universidad de Hildago (two hours from Mexico City). It is a bit like Mumbai’s Whistling Woods International, a well-endowed small arts college with the budget to bring us to their tiny mountain village on top of a mining community. Well nice photos, Gary. What happened to the students that didn’t click as well as the others?  Pushups, situps and having to run extra sprints?
Ha, ha, Hemant.  These students were fast-learners and up to the mark. So what are your plans now & when are you planning to come to India ?
Most probably ,See you back in India next year for my novel’s launch. As of now all I can say is  Jai Hind!
Nadine Markova Bootcamp photos by Nadine. Styling by Linda Cipres Hernandez Some very beautiful momen from Portugal and Mexico.
Photos by elite student Karina Resendiz
Styling by Linda Cipres Hernandez