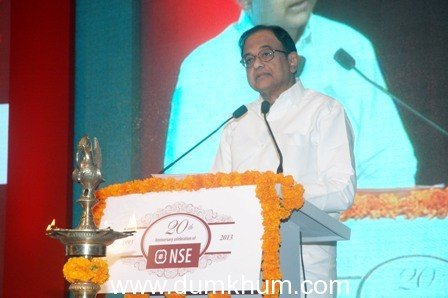 Finance Minister Mr. P Chidambaram addressing the 20th Anniversary event of the National Stock Exchange in Mumbai on December 14, 2013
Union Finance Minister P Chidambaram has called for high level of probity among financial sector institutions  to build a robust capital market in the country.  “It is important that all our institutions maintain the highest ethics and highest standards of pobity.  An ethics deficit can bring down the entire financial system, as we have seen in the past.”  Mr. Chidambaram said this in his commemorative address at the 20th anniversary function of the National Stock Exchange in Mumbai today.
The Finance Minister also said that Indian capital markets were facing many concerns, including low level of investor participation, lack of financial literacy and financial inclusion. He observed that even though the household savings ratio is between 30-38 per cent of the GDP, very little of it gets channelized into financial investments. He said, Indians still preferred to invest in gold and real estate and there is an urgent need to address this issue. “Investors at 21 million account for just 2% of the population. The degree of risk aversion is extremely high. We need to make people shy away from gold and induce them to invest in financial products”, he added. 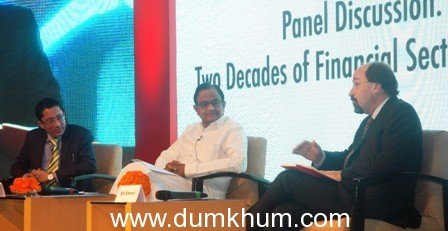 Finance Minister Mr. P Chdiambaram participating in a Panel Discussion “Two Decades of Financial Refors” on the occasion of 20th Anniversary event of the National Stock Exchange in Mumbai on December 14, 2013
Mr Chidambaram said financial inclusion has been a high priority area for the government and therefore it has initiated several measures to expand the financial sector. It has also launched an extensive investor education programme through various market regulators and other institutions to create awareness about different financial products and their benefits. Chidambaram hoped that with the Pension Funds Regulatory & Development Authority (PFRDA) becoming a statutory body, there would be a spurt in pension fund market. He said “innovation should be the watch word of what we do in the capital market”.
Expressing concern over the under developed corporate bond market in the country Mr. Chidambaram said “the banks and the corporates have entered into a cosy relationship. The day, the banks refuse funds, the corporates will be forced to tap the market sources to raise money”.
Referring to the recommendations of the Financial Sector Legislative Reforms Council, FSLRC, Chidambaram said passing legislation on the recommendations made in the report would take time and hence the government has decided to implement non-legislative recommendations in the interim. “Making laws in India has become very complex. Many of you would not understand the trauma we go through in getting a bill passed in Parliament” said the Finance Minister while participating in a panel discussion on ‘Two Decades of Financial Reforms”.  He said, “while the government is committed to financial reforms, the Executive has been constrained by multiple causes including the paralysis of parliament and increased judicial activism.”
Earlier speaking at the anniversary event, SEBI Chairman U K Sinha said the National Stock Exchange, which was conceptualized by the Government and implemented by the public sector financial institutions has greatly expanded the equity culture in the country by breaking the geographic barriers.
National Stock Exchange  today operates a nation-wide electronic market with over 2.30 lakh terminals, offering trading in capital market, derivatives market and currency derivative market including equities, exchange traded funds, retail government securities etc.
PIB Mumbai / MD /SB