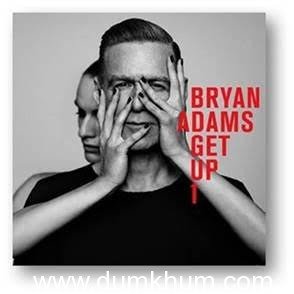 “There is a carefree feeling about this album and in many ways it is the album I wish I’d been able to make 25 years ago”. – Bryan Adams

Multi-platinum, recording artist Bryan Adams has announced the release of his brand-new studio album, “Get Up”. Produced by famed ELO frontman Jeff Lynne and co-written with his long-time collaborator Jim Vallance.

The 13-track album – nine new songs and four acoustic versions – will be released October 16th.  “Get Up” is a solid collection of beautifully-crafted rock songs, from the fast and furious up-tempo tracks such as lead song ‘Brand New Day’, ‘You Belong To Me’ and ‘Thunderbolt’ to the gentler songs like, ‘Don’t Even Try’ and ‘We Did It All’, plus the Adams-produced alternative acoustic versions, highlighting Adams’ unique voice and depth.

“Get Up” is a body of work that Adams is truly proud of and with multi-instrumentalist, songwriter, producer Jeff Lynne – whose credits include The Beatles, Paul McCartney, Randy Newman and Tom Petty, as well as being the co-founder, producer and member of the Traveling Wilburys – at the helm shaping the record, “Get Up” will sit nicely alongside Adams’ earlier classics.

A deluxe version of “Get Up” will also be made available, packaged in a high-quality case and containing an exclusive interview with Adams and a selection of quality photographs, alongside the music. Plus a vinyl version will also be produced for the LP fans and collectors.

“It came together quite organically” recalls Adams “song by song, working with Jeff producing over the past couple of years whenever he had time. It was a great partnership as it gave me plenty of time to write the songs, most of which are collaboration with Jim Vallance. We all worked primarily over the internet from Canada, Europe and LA, sending demos and parts of songs until we got it right.”

“I’ve always been a big fan of Bryan so getting to work with him was a great pleasure”, says Jeff “Bryan would send me a demo across the internet, then I would play most of the instruments to make a finished backing track and send it back to him in England. There he would put the lead vocal on to the song and send it back to me in California. 5,400 miles apart! And it’s turned out to be a rockin’ album!”

“There is a carefree feeling about this album”, adds Adams “and in many ways it is the album I wish I’d been able to make 25 years ago”.

You Belong To Me

•We Did It All

•Do What Ya Gotta Do

•Yesterday Was Just A Dream

•We Did It All – Acoustic

•You Belong To Me – Acoustic