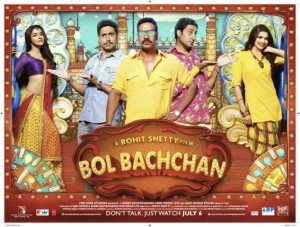 It’s raining praises for Abhishek Bachchan, who ever since the release of his comedy Bol Bachchan, is being flooded with congratulatory calls and messages for his riveting performance in the film –

While the actor has audiences thoroughly entertained with his gags, the critics too aren’t holding back on their praise for Abhishek as he essays the pivotal role in Rohit Shetty’s latest outing.

Janhavi Saman,Midday “The surprise package in the film is Abhishek: he is the perfect foil for Devgn’s Prithvi; his Abhishek is restrained while his gay Abbas is outrageous”
Affirms critic Anupama Chopra “The best thing about the film is Abhishek Bachchan, who lets loose without inhibition.”

Says acclaimed critic and trade analyst Taran Adarsh “Though Abhishek has wowed spectators with wonderful performances in the past, the two characters in BOL BACHCHAN are sure to multiply his fan-following by leaps and bounds. Abhishek goes all out, playing to the gallery, wooing the masses. Abhishek seems to have unlearnt what he had learned and implemented this new style of comedy, which must’ve been very complex and challenging for him. Watch him in the dance act at the interval point. It’s incredible. Abhishek gets the two characters right and how!”

Says Ajay Brahmatmaj ,Dainik Jagran “Abhishek ‘s performance in the film is by far the best – Though he is dabbling with 2 characters never once is the audience left bored or un-entertained “
Adds Amul Mohan “Abhishek Bachchan is really funny in the film to say the least – He has a knack for comedy but with Bol Bachchan he takes it to the next level – His timing is perfect, his chemistry –spot on! His performance as Abbas will cement his place in the top running since the movie has blockbuster written all over it! A treat to Abhishek fans.”
Ask the actor what was most challenging while essaying the role and he is quick to reply “Everything! I thought this film will be easy to do, but it turned out to be the most difficult film of my career. And I have done some very difficult films, but Bol Bachchan was exhausting. I have worked very hard for this film”.

And it shows, as Vajir Singh ,Box Office India confirms “If Abhishek Bachchan as Abbas is hilarious, he is equally funny as Abhishek Bachchan. In one word he’s OUTSTANDING.”.Adds trade expert Amod Mehra ” Abhishek is simply electrifying in BOLT BACHCHAN..Blockbuster !!”