Come and partake in one of the biggest spiritual experiences of the year! Block your calendars for the auspicious Surya Yaag to be conducted from 25th to 29th September 2014. 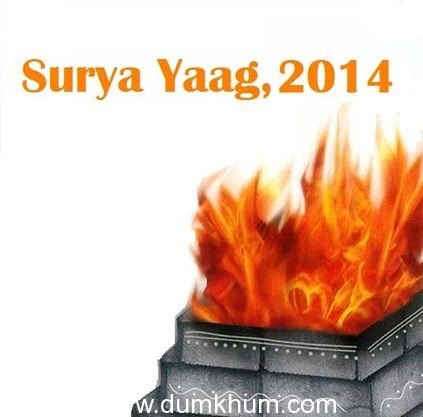 Many of us fill our daily routine with mundane tasks but rarely do we devote time for our spiritual development. A 20 year old, culturally rich temple – Shri Gajanan Maharaj (Shegaon) Mandir is giving you this opportunity to be part of a historical spiritual experience – Surya Yaag from 25th to 29th September 2014 at their temple, based at Goregaon. The concept of Divya Surya Yaag is considered to be of great magnitude and hence is very rarely conducted. This is a once in a lifetime opportunity for people to evolve spiritually, the benefits of which last a lifetime!

Inspired by Shri Gajanan Maharaj, this divine opportunity is presented by Dr. Swaroop Pramanick (Bhau) and Sou. Bhagyashri Pramanick (Maa) of Shri Gajanan Maharaj Mandir, the leading Yajmaan of this Yaag. Shri Premnath Shukla, the Pramukh Acharya will be presiding over this yaag, which begins on the auspicious days of Pratipada tithi, the beginning of Navratri and concludes on the day of Panchami. Out of all 5 prime Gods followed in Hindu culture, Surya – The Sun is undeniable (pratyaksha devata). He is the only God one cannot deny, as he is visible to us and touches our lives in every aspect. Each one of us has definitely seen and experienced God Surya, spiritually and scientifically. The manifold positive impacts of this Surya Yaag will benefit on many levels such as self, family, society, our country, our Nation and the environment at large.

The brilliance and radiance of this yaag will permeate into each attendee’s lives through prayer for good health, to obtain excellent career and growth, to have name and fame, to minimize the malefic effect of afflicted sun and for excellent academic results. It will also aid in getting rid of eye and skin related diseases of all participants. The Surya planet raises strength of glory, power, courage and success. It also affects the soul, will-power, fame, the eyes, general vitality, courage, father, highly placed persons and authority. Thus participation in the Surya Yaag will touch all these areas with its golden radiance. The main havan kunda will be a 12 sided star along with 4 other kundas. It will be a ‘panchkunda’ havan. The main offering in the havan will be flowers of the ‘Mandaar’ tree along with the usual havan material.