Bigg Boss Season 8 is scheduled to take off on Sunday, 21st September, boarding starts at 9.00 PM Get ready to board Bigg Boss Airlines #BB8, a flight with no flight-plan! But what you have in store is a never-before-seen thrilling adventure which promises to be all about bumps, jolts and spilled drinks. This year the flight readies to jet set with 12 first-class passengers who will need to carve their own paths, forge their own connections, accept the quirks of their seat-mates and survive in this airspace. With newsmakers from all walks of life having blocked their seats in this one of a kind aircraft, are you ready to experience the world from different time zones? Watch Captain Salman Khan teach the travelers how to unpack the backpack of their lives with his quintessential sense of humor, genuine empathy, and raw reactions to the contestants.

Pieced together by Endemol India Pvt. Ltd and fueled by Snapdeal.com, India’s largest online marketplace, this engine is ready to leave the runway on September 21st 2014 with daily flights to take off from Terminal COLORS every Monday to Sunday at 9PM. Commenting on the launch, Mr. Raj Nayak, CEO – COLORS, the Bigg Boss Airlines Chief said, “Bigg Boss has grown to become much more than a show, it is now a television phenomenon. With the continued success of the show season after season, we are now looking forward to surpassing audience expectations with an airy-edgy theme. As the show prepares to leave the runway, we hope to transmit incredible entertainment for our viewers straight from up there! It’s time for audiences to fasten their seatbelts and get ready for a ride of a lifetime through calm and turbulent weather conditions.”

“As we explore newer avenues, we have made successful partnerships with Snapdeal.com, Oppo Mobiles, Maruti Suzuki, Garnier Men, TVS Motors, Cardekho.com Bisleri Urzza and JK Tyres who’ll make the journey of the passengers all the more pleasurable,” he further added. 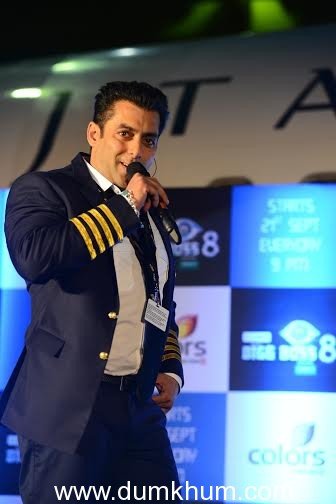 Flight captain and mid-air narrator, Salman Khan on holding the controls for the fifth time said, “Like always we’ll have an incredible range of travelers onboard this time. As we fly high, I can only advise the passengers to stay calm and collected as patience, tolerance, tact and trust are the only tools that will control the turbulence. As a captain, I’ll keep a check on the passenger’s safety and well-being week on week to ensure that their journey is smooth yet not so smooth in this whirlwind voyage.”

Stepping in as the sponsors of the Airline #BB8, e-commerce giant Snapdeal.com’s Mr. Kunal Bahl, Co-Founder & CEO said, “The partnership was a strategic decision to reach out to the larger target audience. Bigg Boss is a show which is followed across the country and we wanted to be associated with a name which has a high consumer recall. We are excited to be a part of Bigg Boss Season 8 and hope to build our relationship with COLORS going forward.” 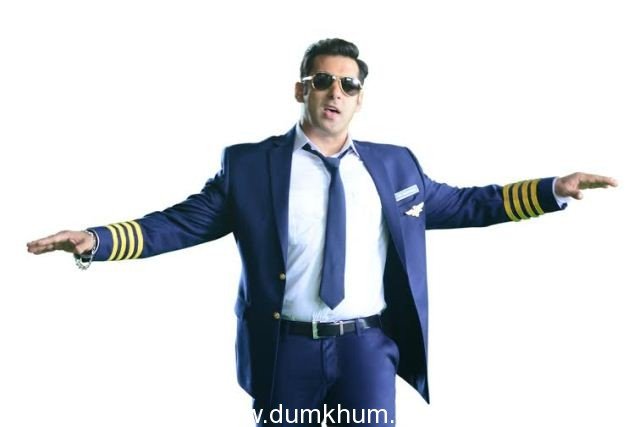 Said Ms. Manisha Sharma, Chief Creative Engineer of #BB8 on living up to the expectations of the viewers, “The Bigg Boss House is a nation within a nation, with its own language, architecture, mood, and even its own currency—the token that the inmates value even more than the real currency while being trapped. In their quest to traverse the farthest while jostling through the unsettling conditions and without any means to communicate with the outside world, it’s their patience and perseverance that will see them through and help them for a perfect landing.”

On leasing Bigg Boss Airlines #BB8 for a promising journey, Deepak Dhar, Managing Director – Endemol India Pvt. Ltd. said, “Endemol’s most successful reality format globally, Bigg Boss has won over viewers across age groups. The audiences revel in the erratic format of Bigg Boss and with every season we reinvent ourselves to make the show as unpredictable and entertaining as ever! We hope that this seasons’ numerous surprises, will have everybody glued to their televisions.”

Hundred percent consumer entertainment being the mantra of Airlines Bigg Boss #BB8, the marketing strategies will revolve around increasing the market penetration and connecting with new consumers. The route will be encompassing all the mediums across 200 cities and towns to encourage repeat flying for the viewers. For a higher resonance radio stations across 30 cities will be tapped. For buildup, promotional content will be plugged in across 30 channels and, for a glaring visibility and tune in, an attractive outdoor campaign will don the high walls at strategic locations in key cities. In order for the consumers to get better passenger information an interesting digital plan has been floated. Viewers can source all the daily milestones via facebook and twitter. While facebook will have a fun Bigg Boss themed app to test the survival strategies of the player, twitter will leak LIVE information 24×7. The website will have uncensored videos and a Khabri who will blog live updates. There will be an interesting mobile app which will beam the Live feed to keep the viewers tuned in on the go.

With all these services enabling the spectators to see who is on the flight, get Live updates on their actions and vote who should be off loaded, Airlines Bigg Boss #BB8 urges the viewers to treat this flight time as their private time.  As for the 12 travelers, whilst they embark on this once-in-a-lifetime journey into the unknown skies for a period of over 90 days under the constant glare of 82 cameras, we only hope that they have a delightful as well as a gripping journey!

Come aboard #BB8 as it takes off daily from Sunday, 21st September,

Confirmed time of departure @ 9.00 PM only on COLORS

Catch all this and more on colors.in.com/biggboss | You can also follow the action on Facebook at COLORS TV & BIGG BOSS or Twitter at @COLORSTV and @BiggBoss using hashtags #BB8 | Instagrammers can get exclusive information on COLORSTV

Endemol India is one of the leading and most valuable content production companies in India across television, film and digital content. The company is a 51:49 strategic alliance between Endemol BV- the world’s largest independent television production company and CA Media – the Asian investment arm of The Chernin Group (TCG). The company has over the years produced successful television shows like Bigg Boss, Fear Factor, Laughter Challenge, Jo Jeeta Wohi Super Star, over 400 episodes of Deal or No Deal and the recently launched The Money Drop for Sun Network amongst others. Endemol India has also forayed into the movie making business with the remake of blockbuster Kahaani in Tamil & Telugu.