A rebellious attitude gripped some members of the house on Day 15 as they disobeyed the rules of the Bigg Boss house, by conversing in English and devising schemes. But no act of defiance goes unnoticed in the house of Bigg Boss. As punishment, the food ration has been restricted to strictly Rice and Daal and nothing else. While the offenders Puneet, Upen, Sushant, Minisha and Diandra have been warned time and again, the brunt of their actions is going to be borne by all the contestants in the house. This outburst was as a result of the  weekend episodes of Bigg Boss. The views and opinions of Kamiya, Andy and Salman Khan created a lot of ripples between the housemates leading to inevitable strategizing within the house. 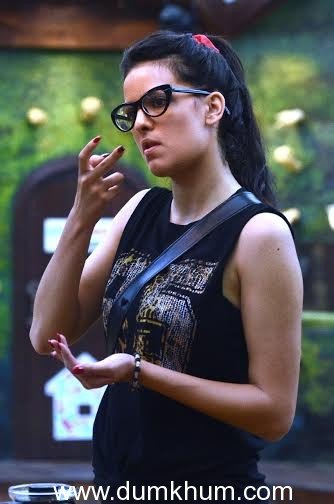 A man of his words, Praneet Bhatt shaved off his beard as he survived in this journey and escaped eviction. While Sukirti had to bid adieu to her fellow housemates, Gautam found company in Praneet and  Pritam. Minisha and Sushant were seen talking about Gautam and the fact that his punishment has been prolonged far too much. After a long night, the housemates tried to keep themselves distracted by playing dumb charades, marbles, singing and dancing. Minissha Lamba was summoned by Bigg Boss inside the confessions room for a one on one. Unpredictability was promised from Day -1 in this season. It came as a surprise to the contestants  when Bigg Boss announced the nominations procedure for this week just the next day of the eviction, thus leaving them without any time to plan and plot. With none of the members being immune this week, every housemate ran the risk of getting nominated. Will grudges be forgotten and will the bygones be bygones?