The films logo was unveiled by T.P. Aggarwal and the event was attended by Producer Purnima Mead, the star cast of the film and the director Keshhav Panneriy. The highlight of the event was the way the characters were introduced to the audiences. Commenting on her decision to back this project, Purnima Mead said, “Getting a real good script these days of content backed cinema is not an easy task. Having worked with Keshhav before, we had absolutely no hesitation in green lighting it. We are all very excited about this project and are sure audiences will share the same sentiment when the movie hits the theatres.” 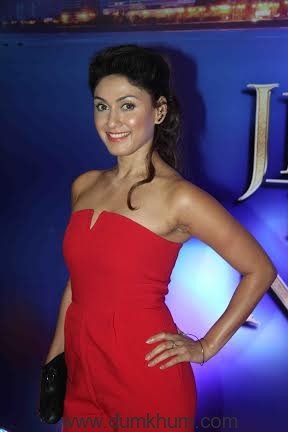 A visibly excited Keshhav Panneriy said, “Jeena Isi Ka Naam Hai for me is a very special film as it would be my first full-length Hindi commercial film. More importantly the story of this film is very intriguing and I am really excited about this project. I am also very grateful to Purnima Mead and Bibia Films for trusting my vision. Also I have bunch of great actors in the film who have done a fabulous job and are also providing inputs to make the script much more interesting.” The film is in the last leg of its shooting schedule and soon the post production for the same will start. The film has been shot at never seen before locations of Mumbai, the royal palaces of Udaipur, New York, Manhattan and constitutional hall in Washington DC. Vintage cars and great locations have been used to which would give a great viewing experience to the audiences and the film is slated to release in the last quarter of 2016. “Jeena Isi Ka Naam Hai” is the story of Alia a young village girl whose courage helps her break the shackles she was born with and discover herself, it is the story of courage, strength and achievement Produced by Purnima Mead of Bibia Films and directed by Keshhav Panneriy, the film is written by Amrita Roy and Purnima Mead, Screenplay is by Keshhav Panneriy, DOP by Rupam Chetiapatra and Music by Onkar Minhas, Vishwajeet, Harry Anand and Siddhant Madhav. Bibia Film Production is an extension of Bibia Books. A place where imagination goes wild yet carefully handled and picked out from a large canvas called ‘life’. An everyday lifestyle of different phases, eras, moments, experiences, challenges, shortcoming, strength, vulnerability, emotions, choices etc. all compressed into Lights, Camera &amp; Action and eventually on Silver Screen, just for one to glance back and see how far they have travelled. Bibia Film Production believes in real life, inspirational and motivated stories. Something that one can fall for, embracing it with open arms and cherishing it for life. Bibia Film Production though is at a very infantile stage; it has already felt its grip and strength as if it has reached its maturity – thus the power of aggressiveness and determination. There are many gems covered with gunk, all we got to do is recognize and bring them at the forefront – Life!

Purnima Mead is an Indian native based in America. A determined and resolute woman ahead of her times, she decided to give went to her imagination as a writer by taking up expressive/descriptive writing. Her efforts culminated into a fiction storybook for children and till date she has three published works to her credit under the Bibia series.  Taking a page out of her own experiences in small towns and being a victim to the impoverished life a woman was subjected to in her childhood, she has grown to be a successful example of a triumphant survivor amidst all odds. She stands by the mantra: ‘If you can dream it, you can make it happen.’ She is now embarking on a new journey as a producer and storywriter for films under her banner Bibia films, US with the production titled ‘Jeena IsI Ka Naam Hai’.

Indo-Canadian director Keshhav Panneriy is backed by a solid experience of theatre for over 20 years and a significant decade of professional filmmaking. He started his career as an actor at the early age of five on stage and later went onto perform as an outsider at the National School of Drama in 1996. In the year 2000, he acted in the play Shakaar’, staged at the world famous theatre festival NANDIKAR at Kolkata. He has worked closely with a diverse range of local and international theatre companies and renowned names such as Sir Jhon Russel Brown, Steve Jharend, Renee Porte, Arya Rice, Rozalia Hummer and Dr. Devendra Raj Ankur. In the year 2008, he graduated in Film Production from the Toronto Film School, Canada, a part of the International Academy of Design &amp; Technology-USA. He was appointed as Creative Head for A K Films Inc. Toronto, Canada and went on to work in many North American Film productions as Director and technical consultant. He founded Keon Arts Private Limited, India where he operated Keon International Film Academy in collaboration with A K Films Inc. Canada with all American filmmakers as faculty. He believes that filmmaking is an apt medium for the free expression of his creativity and imagination.

As a young filmmaker who is full of ideas, he wishes to venture into unexplored realms of filmmaking by experimenting with new themes and subjects. Keshhav has recently made India’s first Real 3D stereoscopic musical short – “Eternal Love”. He is set to foray as a filmmaker in India with ‘Jeena Isi Ka Naam Hai’.