Yo Yo Honey Singh with T-Series’ Bhushan Kumar and Hungama’s Neeraj Roy came together at Sahara Star to launch Yo Yo’s new album ‘Desi Kalakaar’. Honey Singh’s also launched the album’s first video song ‘Desi Kalakaar’ starring Sonakshi Sinha. He after the video unveiling performed at two other numbers from the album ‘Love Dose’ where he was joined by Urvashi Rautela who will be featuring in the song and ‘1000 miles’. Present at the unveiling was Bhushan Kumar’s wife Divya Khosla Kumar and son Ruhaan. The album comprises of 8 songs that will take the audience back to Honey Singh’s roots of Punjabi numbers that have unconventional music notes. They being club numbers, Honey Singh has composed and written all the songs that  gets his old flavor back thus giving the name ‘Desi Kalakaar’. Bhushan Kumar, T-Series speaks on taking his association ahead, “Honey Singh and me have been working together for long and we share a good rapport that makes us work with each other again and again. Desi Kalakaar will take Honey Singh’s fans to his old roots and they will definitely love the songs more with the way they are picturized.” 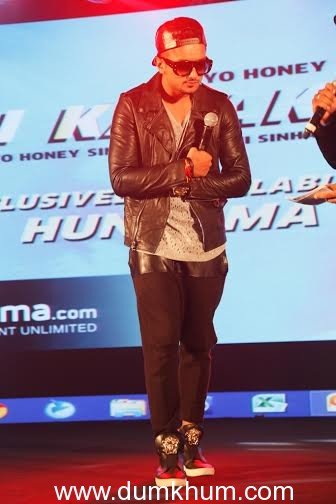 Yo Yo Honey Singh’s quote, “Desi Kalakaar is my transition from a rapper to a singer. The first song is with Sonakshi Sinha and I want to thank her for being part of this album. The interesting part about Desai Kalakaar songs is that they are not just songs but a short film each in itself, which is something new. I have worked very closely with Bhushan Kumar and we have managed to give some superhit songs together. They always give the necessary creative freedom to the artist which I really appreciate.”