Sanjay Mishra, known for his comic timing and laugh riot act, had a very tough time wooing a cow in Sachin Gupta directed comedy film ‘Thoda Lutf Thoda Ishq’. Sanjay Mishra, who is playing a politician in the film and is called Neta Ji by everybody, has special affection for this cow in his gowshala.. In one of the scenes this cow is supposed to come out of the shed while Mishra is walking in. “Whatever we tried, cow refused to budge. She sat down and wouldn’t get up only. It became such a hilarious situation for everybody. Sanjay Mishra finally started getting irritated but madam cow had decided not to cooperate. We pushed her, we tried to pull her but everything failed. She took full three hours to oblige and all this while Sanjay was waiting outside because he did not want to miss out on this one shot.  1 minute of scene took 180 minutes to shoot,” laughs director Sachin Gupta. Sanjay Mishra reaction is “Bhagwan bachaye ladies se. Even the buffaloes are moody.” ‘Thoda Lutf Thoda Ishq’ is produced under the banner of Chilsag Motion Pictures. It is the story of two good for nothing boys Jhumroo and Ghungroo, who are best examples of fools and keep loitering around the whole day. Their sole aim is to have fun, befriend girls, go to parties,  get drunk and chill. Their search for a job always turns into failure. Eventually they find a job in a beauty parlor and their life turns topsy turvy. 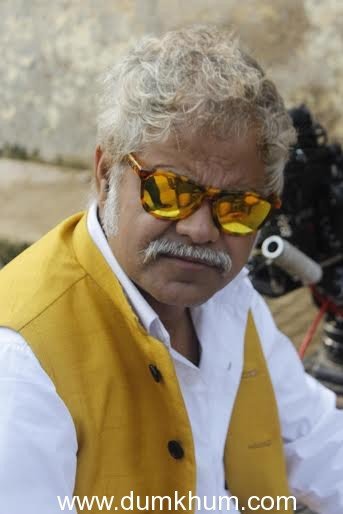