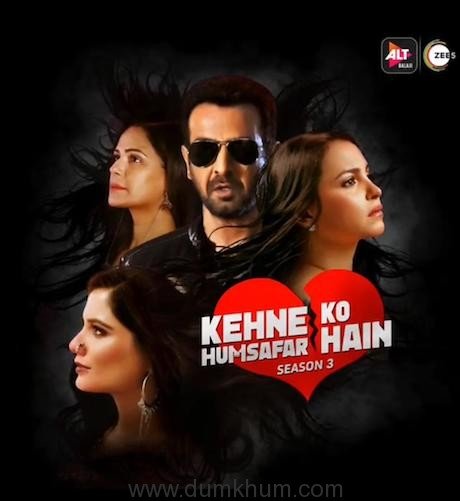 The emotional yet beautiful trailer of ALTBalaji and ZEE5’s Kehne Ko Humsafar Hain 3 challenges the societal norms of marriage, relationships, and love!

Filled with a host of twists and turns, this urban and mature love story filled with heartbreak is all set to launch on June 6th

Mumbai, 23rd May 2020: After the grand success of the first two seasons, the wait is finally over as ALTBalaji and ZEE5 are back to regale audiences with the third season of its most successful franchise- Kehne Ko Humsafar Hain. With the show all set to release on June 6, the two platforms added to the excitement by unveiling the trailer of the much-awaited series which will once again see stalwarts of the Indian television industry- Ronit Roy, Gurdip Kohli Punjj, Mona Singh, Apurva Agnihotri along with Aditi Vasudeva amongst others.

The trailer portrays the changes in the lives of the protagonists after a leap of 4 years. Ananya is a successful businesswoman and a mother, she was earlier calm has now become hurricane Ana who lives on the edge. Poonam on the other hand has moved on and is leading a happy married life with Abhimanyu. Rohit has now gone totally carefree, with no responsibilities in life. With Nothing to lose and nothing to care he calms his turbulence down by either going on bike rides or getting into mindless relations with younger women. With Nisha (Anjum Fakih) and Amaira (Aditi Vasudeva) also making an entry in Rohit’s life, one might think Rohit is enjoying his latest romance to the fullest but his past makes him unable to accept the reality that Poonam and Ananya are no longer part of his life. The trailer further showcases the emotional trauma Rohit’s daughters go through due to his reckless behaviour. Bani and Nikki, daughters of Rohit and Poonam, had faced a lot of trouble and hardships in life due to their parent’s failed marriage and just wanted things to get back to normal. And the chaos doesn’t just end here in the trailer as Rohit has some eventful encounters with Ananya’s and Poonam’s husbands.

Speaking about the trailer, versatile actor Ronit Bose Roy, who essays the role of Rohit Mehra in Kehne Ko Humsafar Hai 3, shared, “I had a feeling that this show would appeal to the audience but had never imagined it to become such a huge success. Absolutely grateful to the audience for showering their love for our earlier 2 seasons and making season 3 possible. To my audience I’d like to say, Get ready for a banging season with shocking revelations and all shades of grey lined with silver! I hope you guys have as much fun as we had while shooting it. You don’t want to miss this one for sure”

Gurdip Kohli further quipped, “In this season, viewers will get to see a new Poonam and her many shades. With an already failed marriage and after getting remarried to a much younger person, there is still a sense of insecurity that hounds her. I am delighted to have played a role that has changed so much over the three seasons. The show has once again dealt with relationships and emotions in such a mature manner that I am sure the audiences will love it.”

Two people who loved each other immensely, who fought against all the odds to be together, are today broken and despise each other. Picking up exactly from where it left, Kehne Ko Humsafar Hain 3 just leaves us with one question – Will love ever be the same again?