Bajirao Mastani, the country’s next big labor of love! 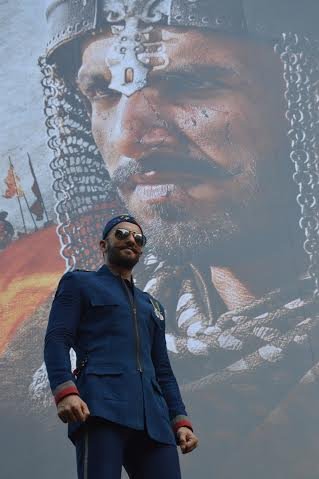 Known to create nothing short of masterpieces, Sanjay Leela Bhansali ,has never failed to deliver films rich in content and high on entertainment. With this visual spectacle ,the filmmaker promises to outdo himself  !

It is truly a great time for cinema as once in every 50 years does a film of this caliber come from India. Promising to be not just a film ,but an experience, Bajirao Mastani remains one of the most anticipated films in the history of Indian cinema.
Sanjay Leela Bhansali is happy to introduce to audiences his longstanding dream starring Ranveer Singh, Deepika Padukone & Priyanka Chopra among others. The film backed by Eros International will transport audiences to a land of war,passion, grandeur and love. As the trailer of the magnum opus recently launched online, the Indian film industry came together to show their solidarity and support the film and its first-of-its-kind attempt.

If that wasn’t all considering the scale ,the years of research , the starcast and the manner in which the film is being mounted, the promotions of the magnum opus too have been in sync with India’s first truly global film.

Keeping in line with the larger-than-life theme of the film , the promotions helmed by Raindrop Media , have been a major driving force of the campaign. Starting with the unveiling of the solo posters, that were dropped down by Ranveer and Deepika from a height of +70 feet. The first song Gajanana was launched with a human mosaic formation that went down in the Guinness Book of World Records as the biggest launch done for a song with a formation of such enormity.

This was followed by the online launch of Deewani Mastani which had audiences arrested with the replica of Aaina Mahal and Pinga with two of Bollywood’s most popular actresses, Deepika Padukone and Priyanka Chopra, performing together for the very first time . The trailer launch too was befitting Bhansali’s beautiful work of art as Ranveer and Deepika made a grand entry in a horse driven carriage. As a special surprise to the audience, Priyanka Chopra who is currently shooting for her hit international tv show in Montreal , joined the launch via live video conferencing.

The latest victory anthem from the film, the adrenaline pumped Malhari, now has industry circles buzzing. Ranveer who traveled to Bhopal with 50 dhol players to launch the song was mobbed as over thousands of his fans gathered to catch a glimpse of the star. All this and more has the trade rooting for the film . With strong content , breathtaking visuals, production values on par International standards , coupled with smart strategic promotions ,it looks like the team has a winner on their hands.

The film is also touted to make a killing at the international box office thanks to the popularity of Priyanka Chopra. This year, the global television viewing audience woke up to the actress as she headlines the hit tv show Quantico, the overseas market and NRI community now look forward to the film ,that promises to be one of Priyanka’s finest performances.

Bajirao Mastani has been trending on social media with the promos and songs heightening anticipation, as it nears its big worldwide release.
Says Taran Adarsh, “Sanjay Leela Bhansali is at his best. Promises to be a film of epic proportions! “
Says Komal Nahta, “Mind-blowing! Mesmerising! Magical!! Take a look at the#BajiraoMastani trailer be bowled over by the spectacle.”
Says Amod Mehra, “I felt #BM was making a mistake releasing on the same day as #Dilwale.. but after seeing the theatrical trailer of #BM I think vice versa.”
Adds Amul Mohan, “This is what EPIC looks!! The tremendous. The terrific. The theatrical trailer of Bajirao Mastani ..Can’t Get over it”.
Adds Pritish Nandy, “#BajiraoMastani looks like it’s about to rewrite history. It’s #JodhaAkbar on steroids.”