B-Town spills the beans on their Real Life ‘Saala Khadoos’. 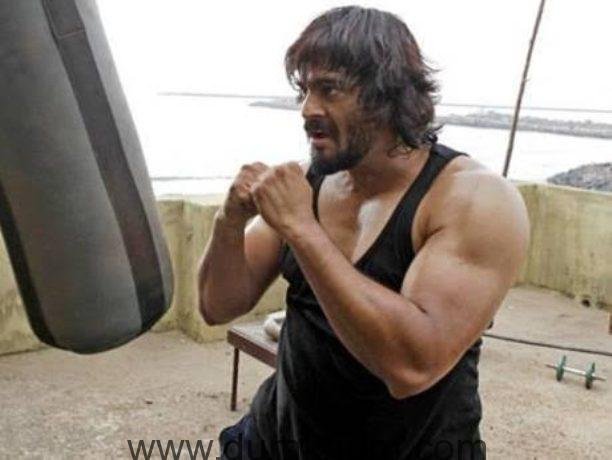 Rajkumar Hirani’s ‘Saala Khadoos’ has opened up to positive reviews. The renowned film maker had organised a special screening for his friends and family from the industry. After watching the film, celebrities like Shilpa Shetty, Dia Mirza and Rohit Roy, instantly tweeted about how they had loved the film.

In fact, before the release many of the B-town celebrities also revealed their real life Saala Khadoos’s through an innovative Twitter campaign, which was initiated by Rajkumar Hirani himself. After posting his picture with his life’s Saala Khadoos (mentor) Vidhu Vinod Chopra, Raju Hirani  tagged other actors on social media asking for their life’s Saala Khadoos. Raju wrote,”Here is #MeraSaalaKhadoos who inspired & pushed me to the limits. Pix from Munnabhai Mbbs”

The films lead actor, R Madhavan further took the campaign further by posting a picture of himself with Kamal Haasan who he termed as his Saala Khadoos. Madhavan said, “here is #MeraSaalaKhadoos who pushes me to give my best? Who is yours? “Ranveer Singh replied by sharing a picture of himself and director Sanjay Leela Bhansali, tagging him as his Saala Khadoos. Ranveer shared, “@RajkumarHirani Sir Ye Dekho! #MeraSaalaKhadoos ! #SanjayLeelaBhansali pushes me 2 excel & brings out the best in me!”

Actress Anushka Sharma shared a picture with her brother Aneesh Sharma and called him her Saala Khadoos. The actress wrote, “@RajkumarHirani Karnesh Sharma who pushed me (still does) beyond what I had ever imagined I could achieve”
Rajkumar Hirani’s Munna bhai actor, Boman Irani regarded Raju Hirani as his life’s Saala Khadoos and shared, “Hi @RajkumarHirani Here’s #MeraSaalaKhadoos .He pushes me with too much love (offset only)Onset he is Chengiz Khan! ”

It was quite interesting to know the real life Mentors of B-Town celebrities, here is an interesting video, wherein celebrities like Shilpa Shetty, Dia Mirza, Kangana Ranaut and Anu Malik with many others have revealed their real life Saala Khadoos.