Seventy – a unique art show; probably the first of its kind in the country will open at the Hall of Vision, Nehru Centre, Mumbai on 12th and 13th October 2012. B Seventy will showcase the artworks of 70 of India’s leading artists. All these works have one thing in common – their inspiration. Each of the works is a tribute to Mr Amitabh Bachchan in

The works will also be documented in an elegant coffee table book, which has been produced for the occasion. Alongside the artist’s work, the artist’s thoughts behind the artwork have also been captured in this book. It promises to be a collector’s delight and will be available in book stores across the country. 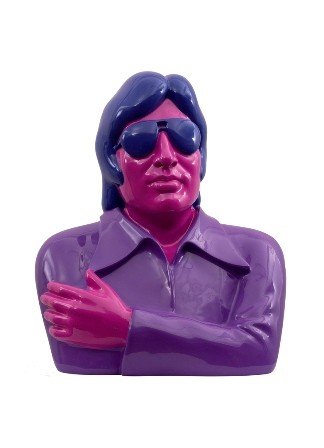 Celebration of the actor’s 70th birthday (on 11th October).

The art show have been jointly conceptualised by Ms Jaya Bachchan and ad guru Piyush Pandey. B70 is a show that is not only every fans dream come true but is also an art lover / connoisseur’s  delight – as it presents artistic interpretations, inspired by one of Indian cinemas most endearing, classic icons: Amitabh Bachchan. B Seventy is colourful and artistic celebration of a man who has stood his ground in the wake of many adversities. A celebration of courage and conviction and most of all, a celebration of character the show also celebrates 70 years of adulation, adoration and influence.

B70 covers a varied gamut of genres of Indian art. These include modern & contemporary art, sculptures, photography, mixed media and even an installation. These works have been created by a list of artists that reads like the who’s who of Indian Art: Akbar Padamsee, Anjolie Ela Menon, Satish Gujral, Badri Narayan , Gieve Patel, Manu Parekh, Paresh Maity, Jayasri Burman, Arzan Khambatta, Farhad Hussain, Satish Gupta, Sujata Bajaj, Praneet Soi and others. Says Piyush Pandey, “Each piece of art that you will see in this book, is a tribute to Mr. Bachchan by some of the great artists of India. Each piece of art carries a little bit of their heart. Each unfurls a layer of the multi-layered personality of Mr. Bachchan.”  The art show has been curated by Sapna Kar. The exhibition at Nehru centre will also feature a display or rare original posters of old films of Mr Bachchan by film historian SMM Ausaja. It is indeed a matter of great joy that this show created in honour of man who has spread so much happiness and joy to millions via his movies will continue the trend for the less fortunate. Part proceeds from the sale of these artworks will be donated via Plan India for the cause of quality education for the girl child. Infact from this year the United Nations has declared October 11 (which also happens to be Mr Bachchan’s birthday) as ‘International Day of the Girl Child‘, following an extensive campaign by Plan.