Oscar-nominated Art Director Jim Bissell, says that fitting together this complex jigsaw of sets was next to impossible!

Jim Bissell is an Emmy Award winner and has worked on a number of Clooney projects including The Monuments Men that airs next week on Star Movies Select HD.

While talking about working on the film, Bissell says, “Every day there were three different sets or locations and they were always big. There were approximately 138 separate locations on this film. It was a road movie since The Monuments Men come together from different locations and move through Europe behind the front line in separate little groups and we had to find and combine locations that would work with very well-known actors. It was relentless every day until we finally wrapped.” 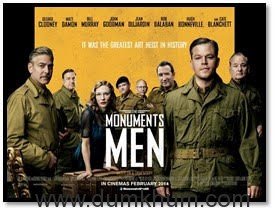 Based on the non-fiction book  by Robert M. Edsel and Bret Witter, The film revolves around the concept of an allied group from the monuments, fine arts and archives program being given a task of finding and saving pieces of art and other culturally important items before Nazis destroy or steal them, during World War II. The film brings out the true story of the real men and the journey to help preserve art, Star Movies Select HD brings alive that tale with True Stories that begins in April. Stay tuned on Star Movies Select HD from Monday to Friday at 6:30 pm to catch the story of these men who sacrificed everything to save their inherited treasure of art!