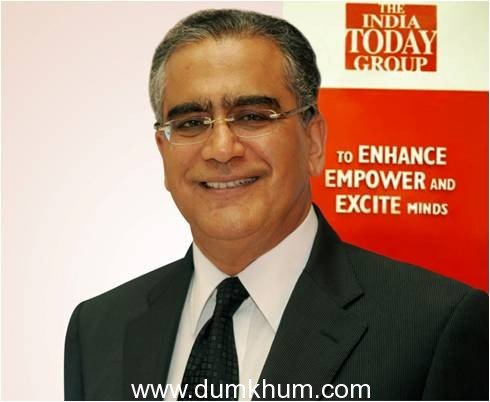 Mr. Aroon Purie, Chairman & Editor in Chief – India Today Group received the top honour of Editor of the Year in the prestigious IAA Leadership Awards for Excellence 2015 held in Mumbai. A veteran in the Industry, Mr. Purie is the founding Chairman and Editor-in-Chief of the India Today Group, India’s most respected and diversified media conglomerate. The Group has more than 36 magazines including editions of leading international titles. Its flagship newsweekly, India Today and other Group publications are all market leaders. It also has four leading 24-hour news channels including Aaj Tak, the nation’s undisputed No.1 Hindi News channel for 14 years in a row, 7 radio stations, a newspaper and a consumer e-com shopping portal and strong digital, mobile and social media presence. Through its multiple media brands and platforms, the India Today Group reaches more than 100 million people every month. An alumnus of the London School of Economics and a qualified Chartered Accountant, Aroon has served on the Board of many prestigious institutions in India and abroad. He was Chairman of FIPP (The International Federation of the Periodical Press) from 2009 to 2011 and was the first Asian to be given this honor. A true pioneer, Mr. Purie has been instrumental in changing the face of journalism in India. He is credited with spearheading the India Today Group into becoming one of India’s largest and most respected media group. Under his leadership, the brands from the group have risen and established into the nation’s most respected names. Among the countless awards that Mr. Purie has won during his illustrious career is also the Padma Bhushan – amongst India’s highest civilian honours that was awarded to him by the President of India in 2001.