Premier Futsal today unveiled their official anthem with the musical maestro AR Rahman today in Mumbai. This is the first time that theOscar Award-winning Rahman is lending his musical genius to a franchise-based sports league in the country.

In another first, Premier Futsal League Ambassador, Virat Kolhi has sung for the official anthem of Premier Futsal. In the video which was also unveiled today, Kohli was seen in his elements as he shared space with AR Rahman for the video of the Premier Futsal. A R Rahman and Dinesh Raj, Managing Director and Co Founder Premier Futsal at the launch of Premier Futsal’s official anthem in Mumbai

AR Rahman said, “I am delighted with the outcome of the Premier Futsal Anthem. It was a unique experience for me to compose an anthem for a sports league, something I have never done before. Recording and shooting with Virat Kohli added to the experience and taking the energy to a different level all together. The Premier Futsal Anthem is fast-paced, peppy and full of swag, these are qualities that we easily associate with Virat and Futsal.”

This high decibel marketing initiative from Premier Futsal, promoted by Mr. Xavier Britto of Indev Group, is aimed at creating awareness for the sport of Futsal and promoting the league ahead of its launch on 15th July. Mrs. Vimala Britto, Co-Promoter, Premier Futsal said, “It is of a moment of great pride for us to have the best in the business work with us to make Premier Futsal a success. With Mr. AR Rahman composing for a sports league and Virat Kohli singing, they both attempted to do something for the first time, just like us at Premier Futsal. All of us together are going to do everything possible to ensure Premier Futsal is a great spectacle for the Indian audience”

The anthem, titled “Naam hai Futsal”, was released with a video featuring Virat Kohli. The video will go LIVE on the SPN Network tomorrow from 8 pm onwards. The concept and production of the anthem have been done by DDB Mudra.

Mr. Dinesh Raj, Managing Director, Premier Futsal said, “When you have two champions at work, you are bound to get something really outstanding. The composition of the Premier Futsal Anthem is fast paced and peppy, and depicts the true nature of Futsal. We are very grateful to Mr. Rahman and Virat for giving us something so special which will be etched in history forever” 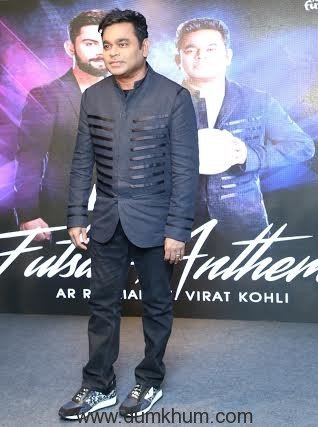 Mr. Namdev Shirgaonker, Founding President, Futsal Association of India said, “Futsal is in a very nascent stage in India. Premier Futsal will provide the much needed impetus to draw some attention to the sport. We at FAI are extremely proud of our association with Premier Futsal. With the likes of Luis Figo, Virat Kohli and now AR Rahman on board, Futsal is taking big strides towards being recognized in India.

Premier Futsal will kick-off July 15, 2016, and will be telecast live and exclusive on Sony SIX, SONY ESPN and Sony AATH. Matches will also be available to live stream on Sony LIV.