Anurag Kashyap presented,  “The World Before Her” to release in India on June 6 through PVR Director’s Rare 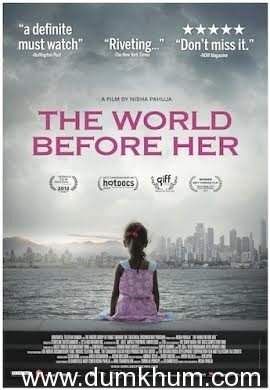 After having a theatrical release in the US and Canada and winning awards at prestigious International film festivals, Nisha Pahuja’s critically acclaimed non-fiction feature ‘The World Before Her’ is releasing in India on June 6 through PVR Director’s Rare.

The much-awaited film, which is presented by Anurag Kashyap will have a theatrical release across eight cities, Delhi, Mumbai, Bangalore, Pune, Ahmedabad, Kolkata, Chennai, Hyderabad.

Set between the fascinating worlds of a Durga Vahini training camp and the beauty boot camp of the Miss India Pageant, the powerful 90-minute feature on women in contemporary India premiered at the Tribeca Film Festival in 2012 where it won the Best Documentary Award.

The film has screened at more than 125 International film festivals and has won 19 awards. It was recently one of 8 films selected as part of Film Forward, an initiative of the Sundance Institute and 4 Federal US agencies including the President’s Committee on The Arts and Humanities.

Shiladitya Bora, head of PVR Director’s Rare says, “We are thrilled to be releasing Nisha’s film. We’ve been talking about this alliance for a year now and we’re so glad to finally be presenting “The World Before Her.” PVR Director’s Rare is all about showcasing alternative voices and visions and this film is one we are extremely proud to be associated with. It’s had a huge impact internationally and we’re confident that Indian audiences will embrace this vibrant and critical story”

Acclaimed director Anurag Kashyap, who supports offbeat projects says, “This movie when I saw it, it impacted me so much. We have started to make a woman believe that for her to be someone she needs to fit into this general idea of being beautiful or else using violence. This film without judging anyone says so much. By the end of it you are so speechless. It holds a very strong mirror to you and forces you to ask a lot of difficult questions. I hope it makes as strong an impact here as it has all over the world because it is about our country. It is about us.”

Chak De India director Shimit Amin who raved about the film at the trailer launch and said he was ‘blown away’ by it, added, “We are the biggest movie making country in the world but this film is the only honest portrayal of what actually is happening here. I have been in this industry for ten years and I have seen a lot of work but I have never seen anything like this. It moved me and scared me. If India’s idea of progress is what we see around us, then see this film and you’ll realize we are nowhere. I am so thankful to Nisha for making this film. It’s ironic that India is the last place it is being released. It should have been the first.”

Nisha Pahuja who is thrilled that after travelling around the world the film is finally releasing in the homeland says, “It has been a tremendous amount of work and effort to bring the film to Indian audiences and now finally it is happening! This is an Indian story, especially important now. I am fortunate to be working with PVR and Director’s Rare and very fortunate that Anurag and Shimit think so highly of the film and are supporting it. It’s also great to be part of this new wave that is happening where documentary films are finally getting their due in India.”

The World Before Her shifts between the worlds of the Miss India pageant and a Hindu fundamentalist camp for girls. In one, Ruhi Singh is a small-town girl competing in Bombay to win the Miss India pageant—her ticket to stardom. In the other India, Prachi Trivedi is a young, militant leader at a camp for girls run by the Durga Vahini, the women’s wing of the VHP. Here she preaches violent resistance to Western culture, Christianity, and Islam.

Moving between these divergent realities, the film creates a critical, provocative portrait of the world’s largest democracy at a key transitional moment—and of two women who hope to shape its future. The film also features former Miss India Pooja Chopra, who was a near victim of female infanticide.