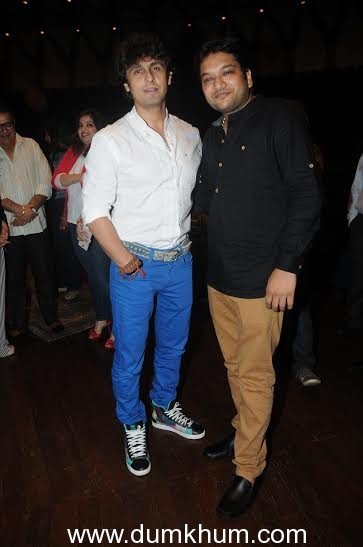 In the time when the existence of cut throat competition is very much alive, it’s always amusing to witness a pleasant camaraderie between the two popular personalities especially belonging to the same fraternity. Squashing all such myths the two singing sensations Ankit Saraswat and Sonu Nigam had a chatty encounter at the recently held musical theater in the city.

While both the singing sensations belonging to different genres flaunt the tiara of fame and popularity; where Ankit Saraswat holds his sheer brilliance in Sufi Rock Music, Maestro Sonu Nigam with his enticing voice inspires several including the Ankit.

Sufi Rock singer Ankit Saraswat draws inspiration from his favorite singer Sonu Nigam. Adding to the merriment the duo embraced at the same occasion and to every one’s surprise discussed on various topics including music, life and their future plans.

Reveling about the encounter,Ankit Saraswat says “Yes, we met at an event and spoke about music. I absolutely love his singing and I also draw inspiration from him. Sonu ji is my senior and meeting someone who’s singing I have always loved what more could I ask for. I would love to adapt to his zeal and passion towards music”adding further “Sonu ji sings every song and genre to his utmost passion which inspires me, however calling him multi talented would be an understatement”.

Ankit Saraswat released his first single Bheegi Si Yaadein under the renowned banner Dauji Films & Entertainment that garnered success with humongous likes & that further motivated the singer to release another single under the same banner, this time attempting Sufi Rock ” Hai Tu..” for which the Music video was filmed last month.