Kavita  after winning her first Filmfare for Goonja Sa Iktara (Wake Up Sid)  & when she was at the peak of her career, the singer lost her best friend, husband, mentor to cancer. And that is when she decided to dedicate an annual music concert to Mr.Seth called Anandotsav. The concert, a celebration of life is Kavita’s dedication to her beloved mentor, friend and husband K.K. Seth on his birth anniversary. “Anandotsav is a concert which i dedicate to my beloved husband as he was my mentor, my friend. This is my way of expressing love to my best friend, husband, mentor on his birthday. This concert has a very special and emotional connect for me. Being only in its second year, we have had a  tremendous response from the music lovers and it was a houseful show much before the event date” said an elated Kavita Seth. 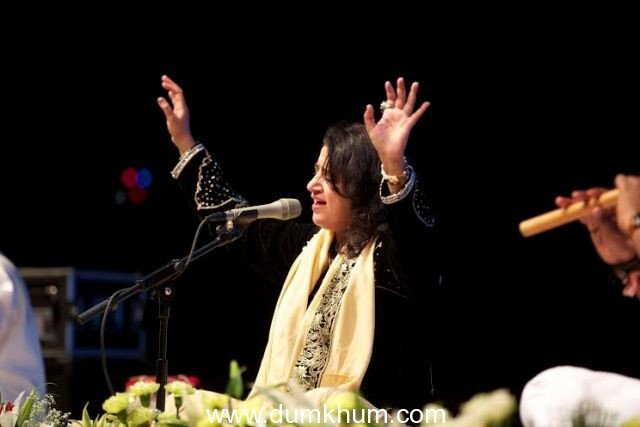 Having performed across the globe at over 500 venues, Kavita of Iktara (Wake Up Sid) and Tum Hi ho Bandhu (Cocktail) fame has once again enthralled the audience with Anandotsav – A Live Sufi Concert. The evening had an amazing amalgamation of Classic Sufi songs and renditions of timeless poetry by Sufi poets like Maulana Rumi, Bulleh Shah, Kabir and Hazrat Amir Khusrow in the mellifluous voice of Kavita Seth that echoed and created memories forever in the minds of all the people who stood awestruck. The singer also combined the memorable moment by donating proceeds from the event for a cause by joining hands with Dharma Bharati Mission to work towards a Hunger Free India.