On 25th Feb at PVR, Amitabh Bachchan launched the first look and theatrical trailer of his upcoming film Bhoothnath Returns, jointly produced by Bhushan Kumar, Krishan Kumar and Renu Ravi Chopra under the banner of T-Series and B R Studios. 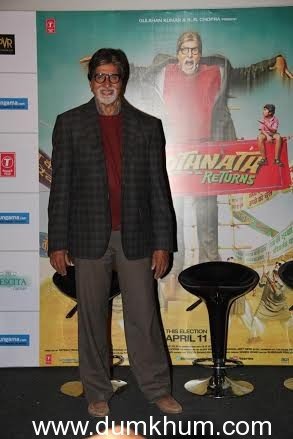 Amitabh Bachchan along with Boman Irani launched the theatrical of Bhoothnath Returns where Mr. Bachchan revises his role of a friendly ghost while Boman plays a politician. The theatre that was converted into a ‘Bhoothworld’, Amitabh and Boman were joined on stage for the first time by the film’s child artist Parth Bhalerao who plays the role of Akhrot. The surprise act of the event was by Mr. Bachchan who did some ghostly tricks. Later, debutant director Nitesh Tiwari addressed the media on his experience of working on Bhoothnath Returns and who was then joined by the producers Bhushan Kumar, Krishan Kumar and Renu Ravi Chopra for further interactions. 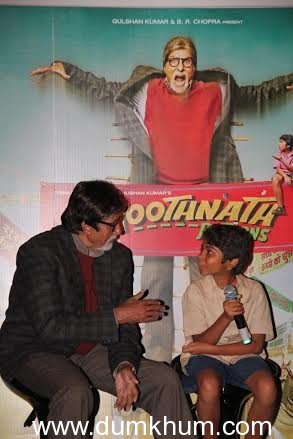 Producer Bhushan Kumar says, “I am very happy to take forward such a popular character of Bhoothnath with kids and all through Bhoothnath Returns. This part is for all age groups and will get funnier with Mr Bachchan and Boman Irani who have very hilarious characters to play along with Parth who has done a fantastic job. 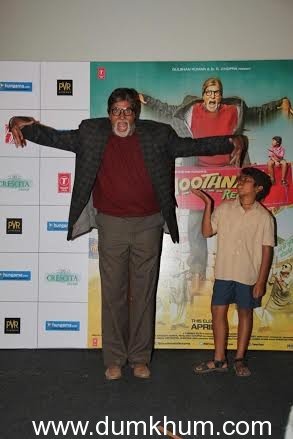 ” Mr. Bachchan says, “I am thankful to T-Series to have approached me for the sequel again. This small kid Parth is the only one who can see me in the film. In this film, he is the hero and I am zero.” Parth on the other hand feels grateful to act opposite Mr. Bachchan who was very friendly with him on stage. Bhoothnath Returns is an entertaining tale of good against evil, weak against powerful, past against future directed by Nitesh Tiwari produced by T-Series and B R Studios releasing on 11th April 2014.