Amitabh Bachchan and Shah Rukh Khan in conversation at the 16th Edition of India Today Conclave. 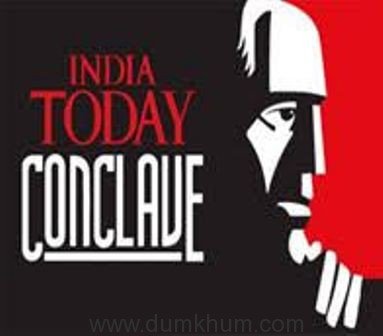 Two legends, one stage, an unforgettable conversation at the India Today Conclave.

It will be a magical cinematic experience at the India Today Conclave as Bollywood legends Amitabh Bachchan and Shahrukh Khan engage in a never-before conversation at the most-awaited event of the year. The two-day event will also see talented actresses Anushka Sharma, Alia Bhatt, and Kalki Koechlin, show us their depth and range. Karan Johar, director, producer, TV show host, author, will be on the other side of the coffee table for a change, being quizzed, not quizzing.

The Conclave will also touch upon the crucial topic of racial discrimination as actor, designer,Waris Ahluwalia, sheds light on living in Donald Trump’s America. With a short movie, ‘Dear America’, he also makes a powerful statement against bigotry and xenophobia.

That’s not all. In keeping with the theme of The Great Disruption, the Conclave will premiere a VR film produced by Anand Gandhi and directed by Sooni Taraporewala, celebrating the spirit of Mumbai.

India Today Conclave is a unique platform where the sharpest minds from across the globe converge to discuss and debate ideas and issues. Taking a break from previous years, the India Today Group’s signature event will be held in Mumbai for the first time on March 17 and March 18. The Great Disruption, the theme of the India Today Conclave this year, will feature ground-breaking ideas, innovative experiences and thought-provoking debates.

There will be two days of talking, listening, thinking, doing and experiencing. From former President of the French Republic (2007 -2012) Nicolas Sarkozy to President of India, Pranab Mukherjee, to titans of the corporate world, the list of speakers this year is bigger and bolder, heralding a wave of change.

As Conclave Director Kalli Purie describes it, “This edition of the India Today Conclave is a progressive and directional platform that aims to contribute in rebuilding the disrupted social order. This specially designed multi-sensory experience, spread across two days will be a great opportunity to listen to some of the sharpest minds across the world, get inspired and take some meaningful memories back home. We believe that significant conversations are the way to generate solutions and the Conclave promotes just that. From mobile movie premieres, spell-binding stage performances, curated experiences and gourmet delights – there’s lots that one can enjoy at the Conclave, apart from a powerful thought flow.”

Come to India’s busiest two days at the India Today Conclave 2017 with the world’s best sharing one stage:

Started as part of India Today’s 25th anniversary, INDIA TODAY CONCLAVE was designed as a meeting point for the best minds from India and around the world to map the geopolitical and economic future of the country. In its inaugural year the theme was India Tomorrow2002: Opportunities and Threats with Vice President of the USA Al Gore as the chief Guest. In its second year the theme was India Tomorrow 2003: Global Giant or Pygmy? The Honorable William Jefferson Clinton, 42nd President of the United States presided as the keynote speaker. The past 14 conclaves have been widely acclaimed and popular for the quality of speakers and discussion. The speakers who have been part of this conference each year are current and former heads of state, Nobel Laureates, spiritual leaders, industry captains, social workers, economists, authors, academics, scientist, strategists, activists, cine directors, actors and sportspersons.