MORE FUN BUT DOUBLE THE TROUBLE! 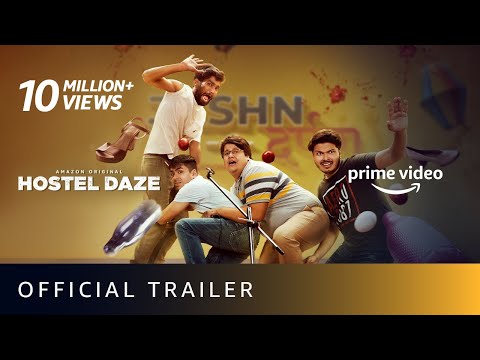 Produced by The Viral Fever (TVF) and directed by Amir Musanna and Sangram Naiksatam, Hostel Daze Season 2 chronicles the journey of the juniors who are now seniors and the new madness that unfolds in the new semester. The much-awaited comedy-drama stars Adarsh Gourav, Luv Vispute, Shubham Gaur, Nikhil Vijay, Ahsaas Channa, and Ayushi Gupta in the lead

Doubling the quirkiness with the crazy bunch in the trailer of Hostel Daze Season 2, the mini-series premieres on July 23 on Amazon Prime Video

In the trailer, we witness the 6 juniors – Ankit, Jaat, Chirag, Jhantoo, Akanksha and Nabomita – are now seniors. They embark on a new journey – entering the second year of college and exploring the notorious and ever-challenging life in a college hostel. Packed with twists and turns and highs and lows, Hostel Daze Season 2 will ensure a ride that is fun, fulfilling, and delivers high doses of nostalgia!

Vijay Subramaniam, Director and Head, Content, Amazon Prime Video, India, “Comedy has always been one of the most enjoyed content genres by Prime Members.  We have witnessed tremendous success for our comedy titles like Chacha VidhayakHai Humare, Panchayat and the first season of Hostel Daze. We are thrilled to bring a fun-filled second chapter of Hostel Dazewith double the quirk and humour, while keeping the essence of hostel life authentic. At Amazon Prime Video, we are committed to delivering close to life, relatable, narratives across genres, while keeping in mind the content choices of our audiences across different age groups. Our collaboration with TVF reiterates our continued efforts to bring rioted, relatable, engaging and entertaining stories to young adults everywhere.

Vijay Koshy, President, The Viral Fever, said, “Hostel Daze chronicles the chaos, the friendships, the struggles that encapsulate the life of every hosteler in India through some genuine characters, who most of us have encountered in our lives. We are delighted to collaborate with Amazon Prime Video for the second season of the show and further strengthen our partnership in bringing engaging homegrown stories. The series has been developed by the core team at TVF, written by Harish, Saurabh & Suprith and helmed by Amir and Sangram, who also started their career in writing and  direction respectively at TVF itself. The series has been performed by some brilliant young talent who with their inimitable styles have managed to secure a fan base for the show. We hope the audiences enjoy the second season as much as we did creating it.”

Does the ride get smooth for the freshers-turned-seniors? To find out, binge watch the mini series as it gears for an exclusive premiere on July 23rd on Amazon Prime Video.

Prime Video is a premium streaming service that offers Prime members a collection of award-winning Amazon Original series, thousands of movies and TV shows—all with the ease of finding what they love to watch in one place.  Find out more at PrimeVideo.com.