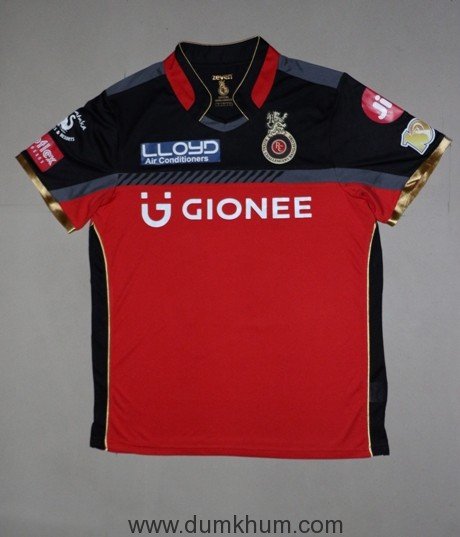 Becomes the first brand to have front jersey partnership with two IPL teams in a season.

New Delhi – Gionee India, country’s leading youth brandannounced its association with the Bengaluru franchise of the Indian Premier League Team,‘Royal Challengers Bangalore’, as their presenting sponsors for the tenth edition of the annual cricketing extravaganza. Gionee is already the principal sponsor of the Kolkata Franchise- ‘Kolkata Knight Riders’, thus becoming the first brand ever to sponsor front jerseys of two IPL teams in the same edition.

Gionee which is highlighting its focus on Selfie + Battery, will have its logo feature on the front jersey of‘Royal Challengers Bangalore’as well as of‘Kolkata Knight Riders’.

‘Royal Challengers Bangalore’features some of the best-known names in the world of cricket today with Virat Kohli, AB De Villiers, Chris Gayle, Shane Watson among others forming part of an all star line up. The smart phone manufacturer had signed Captain ViratKohli as its brand ambassador in November last year.

Arvind R Vohra, CEO and Managing Director of Gionee India, says, “IPL is one of the biggest carnivals on the Indian calendar. It is as big and important as Diwali with millions of fans cheering for their teams throughout the tournament. This partnership puts us at the forefront in the IPL with the Gionee brand being visible in 26 of the 56 games till the knockouts. We are immensely proud to associate with Royal Challengers Bangalore- a team that has an eclectic talent mix and has entertained its fans over the years.”

The announcement comes as a part of Gionee’s aggressive brand strengthening in India which includes launching its flagship product of the year,A1, with an exciting proposition, #Selfiestan featuring brand ambassador Alia Bhat. Gionee has also recently signed up three new brand ambassadors –DiljitDosanjh, Dulquer Salmaan and Shruti Hasan to further strengthen its regional and emotional connect with consumers across the country.