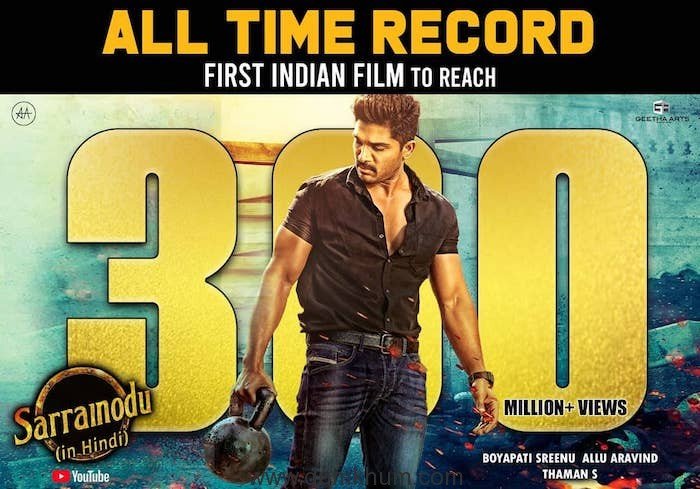 Stylish star Allu Arjun’s movies are watched and dearly cherished by Telugu and non-Telugu speaking viewers around the world. The superstar’s Hindi-dubbed films have regaled Hindi-speaking audiences and his latest release, Ala Vaikunthapurramuloo has been trending at no. 1 position on Netflix. It comes as no surprise then that the actor is the favourite of many big names in Bollywood. What came to light recently, through Goldmines Telefilms, is that Allu Arjun’s blockbuster movie, Sarrainodu became the first Hindi-dubbed film to cross over 300 million on YouTube.

The Allu Arjun-starrer also receives commendable viewership on television. In the first week of June 2020, the film scored a TRP rating of 1.13 on Sony Max on the strength of views from Hindi-speaking masses. Two weeks later, its TRP increased to 1.17, bagging the distinction of being the second most-watched Hindi-dubbed film on the TV channel! It appears that the Sarrainodu actor’s biggest feat is earning love from audiences all over the world, language no bar. He is one of the rare stars whose fans eagerly wait for his Telugu movies to be dubbed in their languages in India. Along with Sarrainodu, Baahubali: The Beginning and Baahubali 2: The Conclusion are two of the most-watched Hindi-dubbed films across YouTube, OTT platforms and Indian television.

Sarrainodu is about Gana, an ex-military man, who fights corrupt people and ends in a fix when his ladylove promises to marry him only if he gives up his violent ways. When the film released in 2016, Allu Arjun won viewers’ hearts in theatres and now his film is scaling new heights of popularity, going by the YouTube views it has gained.

Says a source, “The secret of Allu Arjun pan-India popularity and the success of his films is that he is an all-round superstar, who entertains viewers through action, comedy and romance. The Boyapati Srinu directorial has the actor presenting a wholesome entertainment package and it seems that the viewers can’t get enough of it.”

Allu Arjun fans await the news of whether his Ala Vaikunthapurramuloo gets a Hindi remake or not. Some of his other popular Hindi-dubbed movies are Son Of Satyamurthy, Duvvada Jagannadham and Main Hoon Lucky: The Racer aka Race Gurram.