Renowned as a power couple, Allu Arjun and Allu Sneha Reddy rung in their tenth wedding anniversary at Taj Mahal, which is revered as the symbol of love world over. The stylish star took to his social media to share the celebration and fans showered love and blessings for the adorable couple in the comments’ thread. In the caption space, the stylish star wrote, “Happy 10th Anniversary to us Cutie. What a wonderful journey of ten years … and many more to come”. Allu Arjun and his wife Sneha Reddy celebrate a huge milestone as they clock in a decade of togetherness. The couple tied the knot on the 6th of March, 2011 in Hyderabad. They have two adorable kids – son Allu Ayaan and daughter Allu Arha. 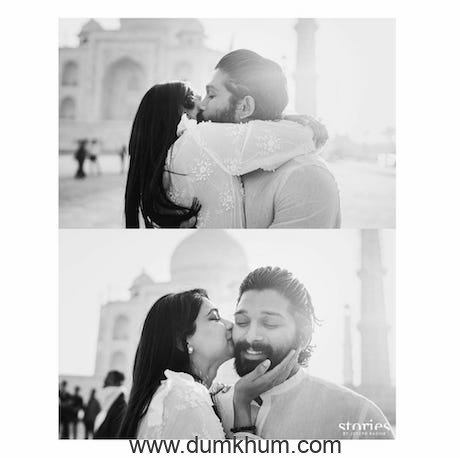 If the stylish star’s social media feed is anything to go by, the couple gives out happily married goals with their adorable pictures time and again. After ringing the wedding anniversary celebrations at Taj Mahal, the couple left for a romantic getaway in the snowclad Dehradun. The fans of the star couple have been pouring out love for the couple and the hashtags #SnehaArjun, #Pushpa and #ArjunSneha have been trending on social media.

Allu Arjun will be seen in cinemas with the big-ticket, pan-India film, Pushpa, directed by Sukumar.