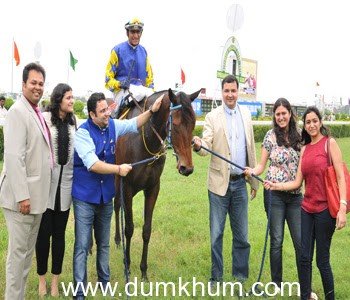 Alaindair (Multidimensional-God’s Grace / Usha Stud) won the President of India Gold Gup – Grade I, thus completing a hat-trick of Grade I races. Winner of the Indian Derby on the first Sunday of February this year at Mumbai the son of Multidimensional had won the Indian Turf Invitation Cup five weeks later at Hyderabad. Alaindair had not raced since then and he returned to Malakpet on Sunday to win a mile and a half race for the third time in a row. Incidentally this was Alaindair’s fourth Grade I success, having won the Kingfisher Derby Bangalore last year. The rare feat is another feather in the cap for Usha Stud.

Six horses lined up for the 12 furlongs grueling trip after the withdrawal of the local hopeful Tintinnabulation. Stable companion An Acquired Taste set the pace from the start and was followed closely by Isn’t She Special, Alaindair, Native Knight, Agostini as they headed past the half way stage with Vijay’s Champ in the rear not able to cope up with the pace. On the final straight Isn’t She Special was the first one to stake claim going ahead but Alaindair who was just on its haunches sped past approaching the distance post with jockey Y.S.Srinath in full control of the gelding. Agostini improved late to be the runner-up ahead of Isn’t She Special. The long-time leader An Acquired Taste finished fourth.

Winning trainer Altamash A Ahmed who is doing a marvelous job of producing good results from a small string that he has in his stables deserves all the accolades in getting Alaindair to great shape despite its absence from racing for six months.

The 4 year old filly Magical Spell (Phoenix Tower-Goodness Gracious / Manjri Stud) from trainer L.V.R.Deshmukh’s yard who has been winning alternate starts in her last five starts followed that pattern to win the Soli And Gool Poonawalla Memorial Gold Cup, a 1200 metres sprint for horses in the highest category. Tracking the leader Vijays Conquer till the top of the straight Magical Spell surged past under Akshay Kumar and quickened well when challenged by the favourite Black Bolt. Vijays Conquer finished third.

K.Satheesh trained Fair And Square (Opportunist-Conqueror) was ridden out by apprentice N.S.Rathore to win the Rani Rudramma Deve Cup. Shatakshi led the field in her customary style and held forte till the last 150 metres. Fair And Square in chase of the leader all the way forged ahead to take over the running and held on by a length from the sustained effort of the race favourite Yksi Yksi Yksi. Field Commander and Catherine filled the judge’s frame in that order. Marquise and Coral Springs were non-starters in the race.

K.Satheesh saddled a double with his Handsome Hunk (Juniper-Matoaka) who had won last nearly a year ago, scoring a stunning upset in the Golconda Trophy. Kianoosh set off on a start to finish bid over the seven furlongs distance and looked to pull it off even as they came into the last 100 metres. Handsome Hunk in mid-field till the top of the straight improved gradually to get into striking distance and with a late burst snatched the race on the winning post. Prince of Arabia also improved well to finish third another three parts of a length away.

Donald Netto trained C Eleven (Mathematician-Crown Charter) justified the short priced favouritism to score an encore in the Perceived Value Cup. Traveling a handy second behind Romantic Fire, C Eleven stretched out easily when jockey A Imran Khan let her go inside the last furlong. Dad’s Dollar was third many lengths behind.

Trainer L.V.R.Deshmukh had started off the day winning the Half A Crown Cup with Vijay Vidyut (Hurricane Run-Ravana). The 3 year old gelding took charge from the front running Time For Smile with a furlong left from home and stayed well till the winning post. The favourite Gentle Chief was in hot pursuit in the last 200 metres but found the winner hard to catch up and had to settle for the second place.

Silver Arnage (Inhabitant-Arnage) winless at 5 years of age from 21 starts was sent off as the favourite at 11-10 in the Raqsh-E-Rustom Plate, the concluding race of the day. In a race where the riders were not allowed to carry whips, apprentice S.S.Tanwar confidently piloted Silver Arnage to her maiden win. Over Look who led till beaten finished second. Maid For Love and Hard Hit finished third and fourth respectively.