Akshay Kumar rocks the final day of ILSW in a Ramesh Dembla creation! 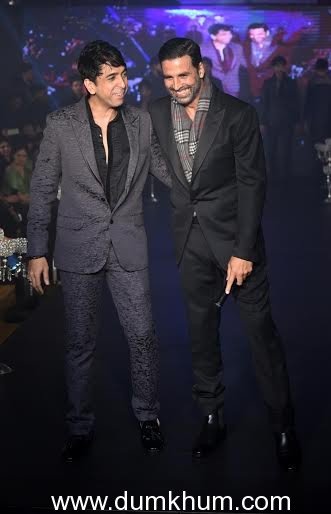 Day 5 commenced with Sumit Dasgupta, the connoisseur of ethnic fashion. Known for the use of Indian craft and textile in his work, each garment of his  was collection crafted as a piece of art with utmost precision. The ILSW collection consisted of the use of fabrics like silk, chiffon, georgette, and brocade with techniques like Zari, Ari, Tie and Dye, Gota and Zardozi infusing this collection with traditionalism and an underlying layer of modernity. The second show of day 5 was by Aasif Merchant, a legend in the field of design. Merchant has been in the industry for 22 years and has supplied to leading fashion houses in Italy. His collection at ILSW was all about sharp cuts and a minimalistic approach to his garments was evident. Crisp suits, bold prints, blues and whites in this collection made it ideal for the discerning man who likes to stand out with subtlety. The showstopper for Aasif’s was popular TV actor Vijay Singh. 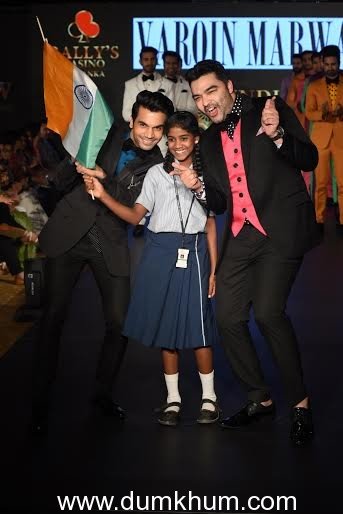 The third show was that of Varoin Marwah of Dubai. Bollywood heartthrob Rajkumar Rao looked dapper on the ramp as he walked for U.A.E’s most famous designer, Varoin Marwah who showcased his latest collection ‘Amala.’ Amala means hope in Arabic and through this collection Varoin took into consideration the cause of the visually challenged. The purpose was to increase awareness and provide hope, education and care to the visually defied and thus this entire collection was his ode to those children. The collection aims to increase awareness for this cause and to offer courage for innocent lives who are eventually going to be the bright future of our country. Since the collection was a winter festive line, fabrics like textured jacquards and suitings have been incorporated. Varoin Marwah’s design aesthetic exudes an extreme international appeal yet always remains passionately Indian. His collection epitomized simplicity, yet on closer look reveales his obsessive attention to detail. The next show was that of Ken Ferns which took beachwear to another level. The models sashayed on the ramp with printed backpacks, shorts in bright hues and luxurious beachwear. The highlight was the fact that each and every model danced their way through the show making it highly entertaining for the audience. Ken Ferns is a name that needs no introduction and is synonymous with Bollywood and Television styling. Ferns collection at ILSW was all about geomotric prints, and the clothes transported one to the becahes of Goa as the stage was set with a deckchair!

The Finale was what everyone has been waiting for the last 5 days and the wait was worth it! Ramesh Dembla, the brains behind the concept of ILSW, a one of its kind, never been done before men’s fashion week, showcased his collection “Krishna Dembla,” named after his son. “Brothers” by bond, Ramesh had the dapper and suave Akshay Kumar as his special surprise act had the audience in a screaming frenzy. The finale started with models showcasing Ramesh’s classic kurtas, jackets, suits in soothing blues, greys, whites and striking blacks. There was then a mesmerizing Laser dance performance by Illuminati from Mumbai that wowed the Bangalore crowd. The act then continued with a suprise singing performace which had Akshay Kumar lying on the floor with a mike singing his famous song, “Mujh Me Tu.” The audience was in awe and could not stop cheering! Akshay then walked the ramp with Ramesh and even did a running sequence on the ramp with all the models!

All in all, a great finale to India’s first Men’s Fashion Week and kudos to Ramesh Dembla and his team!