India’s leading global ambassadors comprising A-list actors, actresses, renowned directors, award-winning authors, dignitaries and esteemed public figures came together in an unprecedented show of unity on the 15th of January 2015 to show their support via Twitter and Facebook for the launch of the historic action/2015 campaign. The campaign, billed as one of the biggest global outreach initiatives in history to address world-changing issues of climate change, poverty and inequality, saw a massive outpouring of solidarity from celebrities such as actor Akshay Kumar, who was the first major celebrity to tweet his support for the campaign reaching over 7.2 million Twitter followers and over 14 million users on Facebook. He was joined by compatriots Sonam Kapoor, 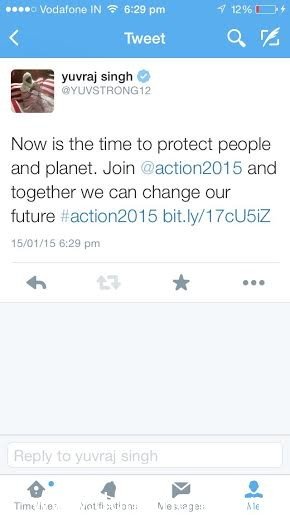 and Vijendra Singh to name some of the growing list of supporters. They issue a stark warning; that while leaders have a historic chance in 2015 to make progress on some of the greatest challenges of our time at two critically important summits, currently too few leaders are playing the leadership roles needed. They set out their fear that if this does not change, leaders could be “sleepwalking the world towards one of the greatest failures of recent history.” India, although a country emerging as a powerful and revolutionary force on the world stage, still worryingly accounts for one-third of the world’s poor.

The action/2015 campaign is a growing movement of more than a thousand organisations in over 120 countries, which is urging political leaders to honour the Millennium Development Goals (MDGs) previously set when they meet at the global United Nations Summit for the adoption of the post-2015 development agenda in September 2015, and the United Nations Climate Change Conference, COP21 in December 2015. The campaign was announced by education activist Malala when she accepted the Nobel Peace Prize. On the 14th January, action/2015 rolled out in New Delhi with a congregation of over 200 children, youth and members of CSOs along with the presence of Honorable Najma Heptullah, Union Minister of Minority Affairs, Amitabh Behar from Wada Na Todo Abhiyan, Shireen Vakil Miller, Advocacy Director, Save The Children, Kaveree Bamzai, Editor-at-large, India Today Group and child representatives like Ayonara Khatun from West Bengal.  In New Delhi, on January 15, a group of fifteen 15-year old teenagers will seek to meet the Prime Minister Narendra Modi and Sushma Swaraj, Minister for External Affairs. A group of fifteen 15-year old teens will also be meeting political heads (Governor, Chief Minister, Ministers) in 15 states on the same day with a set of key requests.