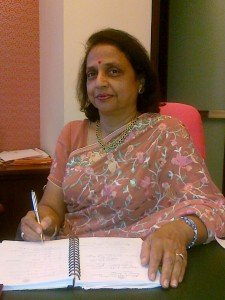 A HUMANITARIAN FORCE TO BE RECKONED WITH…

She was instrumental in initiating a credit finance proposal that offered micro finance for women, empowering them with education, vocational skill training and overall development. With this the IMC Ladies’ Wing presented a sum of Rs1lakh each to two self help groups of Astitva Foundation – (a) Astithwa Mahila Bachat Ghar , and (b) Jagruti Mahila Bachat Ghar in the form of micro credit finance which was supported by HDFC Bank.

Born into the family of Rotary, Darshana is the daughter of erstwhile Freedom Fighter and Charter Member of Rotary Club of Bombay East – PDG. Manibhai Doshi He was instrumental in imbibing the humanitarian attributes into her personality, which saw her getting involved with the Rotary work at a very young age, hosting students and district officials of India and from abroad.

As a visionary and Charter Member of her Club, Darshana motivated 90% of the members to contribute to the Rotary Foundation.

Darshana’s objectives in civic and public service activities are also luminous and meant for the betterment of the people. She has been the main donor of Ghatkopar Balkanji Bari, constructed and donated a science laboratory in the village of Amreli (in the memory of her Late Mother Vilasben Doshi), beautified and cleaned the Juhu Scheme area, and distributed hearing aids to children of a school in Vile Parle. Polio immunization was started in the slums in 1990 and today it has been eradicated from the country. As Chairman for public convenience in rotary district 3140, Ms. Darshana built a partnership with the municipality and Sulab rotary and these efforts have resulted in more than 70-100 toilet blocks in the city.

Over the years, Darshana has been a prolific member to many enterprising institutions:

The first Peace Conference between Pakistan and India, titled ‘ One Billion plus conference for Family planning’ was held in Mumbai. She also received a Significant Achievement Award from President Arun Sathe in the year 2003-2004 for assisting in hosting the team from Pakistan. The Rotaractors recognized her efforts and awarded her with a trophy for helping them to visit Pakistan. She was also recognized by PDG Nitin Mangaldas for the successful hosting of the team from Pakistan in 2005-2006 at Shukriya Function.

She also peace mission to Karachi with Ms. Khushwant Sinha for better ties with the two countries.

So, let’s weave a beautiful World under her futurist guidance and be a part of Darshana’s progressive vision to create better future for all.