After the PCA nomination ,Priyanka Chopra ranks in Hollywood’s Best Beauty Moments of 2016 ! 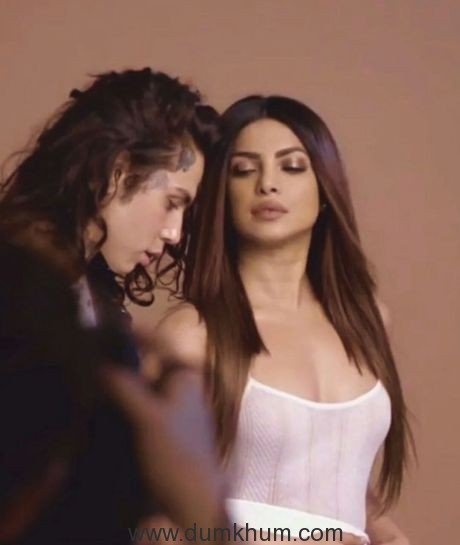 India’s first truly global superstar , Priyanka Chopra, who was also named one of the “100 most Influential people in the world” by Time Magazine was recently announced nominee at the People’s Choice Awards.
This makes it Priyanka Chopra’s second consecutive nomination at the PCA’s. It was only last year that the global superstar won the award for  ‘Favourite Actress In a New TV Series’ in the debut year of her thriller series, Quantico and is now up against some of the biggest, most established female stars in the recent nomination.
Hollywood is crushing on Priyanka Chopra , whether its her magnetic personality, sultry voice or luscious hair and the global superstar along with the man behind her trending hairdos – hairstylist Castillo , recently featured in The Hollywood Reporter’s photo portfolio.
Our Desi girl who turned America’s sweetheart, features in the exclusive portfolio along with other Hollywood names including Rachel McAdams and her makeup artist/sister Kayleen McAdams , Elle Fanning and her makeup artist Rachel Goodwin , Naomie Harris and her make up artist Alex Babsky among others.
Priyanka features with her hairstylist Castillo (who also works with Halle Berry) and the two shot for the pictures with photographer Blossom Berkofsky at Brooklyn Grain, New York .In fact ,one of Priyanka’s looks even featured in THR’s Top 25 Beauty Moments of 2016 ,ranking in at number 6 after Blake Lively , Lupita Nyong , Margot Robbie, Charlize Theron and Beyonce.
Priyanka’s twist on a top knot at Jan. 9‘s BAFTA Awards Season Tea in L.A. emerged on the number 6 spot ,a mix of fun and sophistication that had beauty experts raving.
Talking about sets Priyanka Chopra apart from the rest, Castillo revealed , ” She is definitely a risk-taker on the red carpet. She naturally has an edge.”